Drones add a unique tool to the boating lifestyle.

The interface is a preconfigured split screen—on one side the nautical chart and on the other, a live video display from the drone. The map side shows the position of the boat along with its course, speed, heading, depth, and all the features you’d normally see on an electronic chart.

As soon as the UAV leaves the deck, the chart shows the drone’s position and its relation to the boat. A “rubber band” line on the chart connects the drone icon with the boat icon, so even if it’s flown far away or beyond the range of the chart on the display, a simple zoom adjust reveals its position. In turn, the drone icon communicates its direction, speed, height, and which way the camera is pointing. The camera display side of the screen provides real-time video from the drone’s camera.

Parent company FLIR Systems has a technical partnership in place with UAV manufacturer Dà-Jiang Innovations (DJI) to make a line of airborne thermal cameras to attach to larger DJI drones. The DJI Zenmuse XT2, for example, pairs with FLIR’s Tau2 thermal sensor and 4K visual camera for commercial applications to inspect power lines, pipelines, and solar panel grids. The system is becoming more prevalent with law enforcement as well as the U.S. Coast Guard and search-and-rescue operations. FLIR and Raymarine’s engineers discussed how those systems could apply to the maritime industry which led to the UAV integration, but McGowan adds, “There were a lot of unique things we had to do to make it work well in the maritime environment.” 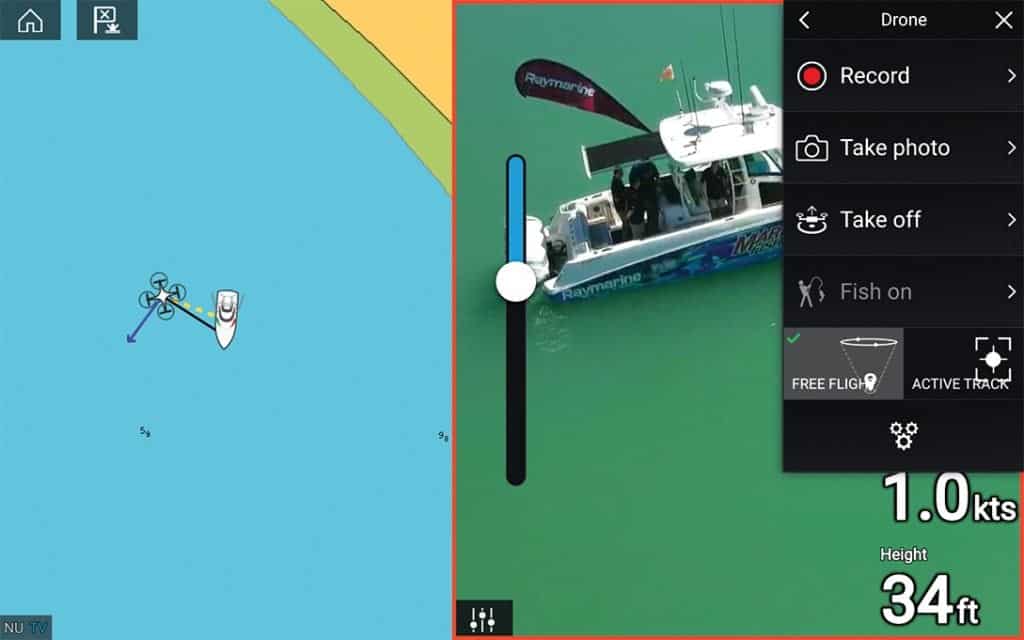 Competitive fishing tournaments, in particular, are where they’ve focused efforts to make drone operation more automated due to most tournaments’ catch-and-release rules. “They have to have photographic evidence of their catch and the gear they were using, so the drone is another tool in their toolbox for capturing whatever photo or video they need,” says McGowan and adds that video of the big catch provides a unique perspective.

“That’s where a lot of the automation work we’re doing comes in. You can launch a drone and fly it and orbit it, but a lot of time you’re short-handed, especially when you get a big fish on the line and everyone’s running around like crazy trying to help, and the last thing [you want] is to have someone flying the drone to keep the action in frame.” Raymarine is trying to automate that process according to McGowan. “You can hit a button and get the drone in the air. The drone knows where the boat is, the drone knows where to point the camera and tend to itself to get the footage you’re looking for.”

For anyone who’s flown a drone, one advantageous feature is Return to Home (RTH). On land, the drone establishes its starting point and when the battery runs low or it goes out of sight, the RTH feature brings the drone back to its starting location automatically. But that becomes harder on a boat. “One of the big challenges is getting the drone back on board because the ‘home’ is moving,” says McGowan. Addressing that problem, Raymarine is in the process of developing the UAV integration with a two-way data link. “The drone sends its telemetry back to the boat and the boat sends data back to the drone so the drone knows where the boat is and where to return to,” explains McGowan.

“It knows the safety parameters around the boat’s environment, so if you have masts and outriggers and antennas and fishing tackle up in the air, the drone knows what the safe sphere is around the boat and how close it can approach. The way it’s going to work in this first cut [of the software] is when the drone returns to the boat, it will basically hit the edge of that safe envelope and hover and wait for you to recover it.” At that point, the operator takes over via the controller. The motion of the vessel can make the recovery dramatic, especially with smaller drones, so unless you have a boat with a big foredeck or sunpads, catching it out of the air is probably the most efficient method right now. Phase two of the software hopes to include ways to improve that recovery process.

Besides tournament fishing, practical advantages of having a drone are finding schools of fish or looking out for reefs and shoals. Imagine cruising in The Bahamas, where the bottom changes rapidly, scouting out an anchorage to get a feel for what the conditions are going to be like. The number of possibilities where drones and the UAV app can aid in the maritime environment are seemingly endless.