Stroll the waterfronts of Sarasota, Tampa, and St. Petersburg for some lively entertainment.

You’ve seen this on nautical charts when you’re cruising Florida’s Gulf Coast: The Florida peninsula bulges out on the central west coast. It’s like a silent signal that this is a good time to refuel, recharge, replenish, stretch legs. Well, then, how about some short walks to cultural attractions in Sarasota, Tampa, and St. Petersburg? Their waterfronts are easy to stroll to the liveliest sections of town, and you can tie up at the marinas and walk to restaurants, theaters, museums, and shops.

Cruise into Sarasota Bay toward the downtown skyline and, voilà, there’s Marina Jack with slips and a mooring field (yeah, like, with services). Exit Marine Plaza and plant your feet on the hard. You’re in Bayfront Park. Look around. Do you see that tall statue of the sailor kissing the girl? That’s the Unconditional Surrender statue based on the iconic photo of V-J Day in 1945 in Times Square. It’s a big deal—literally.

Keep walking. Stroll Main Street and Palm Avenue and have a seat at any one of a number of highly rated restaurants. While you’re downtown, visit the Art Uptown Gallery. Some 24 local artists display and sell their work there.

It’s a long hike but just a short car ride to the Van Wezel Performing Arts Hall. January’s schedule includes music and comedy stars like Renée Fleming, Jay Leno, The Righteous Brothers, Jersey Boys, and Harry Connick Jr. Plus, you can enjoy the Sarasota Orchestra and other events at the nearby Beatrice Friedman Symphony Center.

Sarasota gets special applause for its outstanding museums. The Sarasota Art Museum has several special exhibitions in early 2022: Judith Linhares: The Artist as Curator, whose paintings reflect the influences in her life that shape her work; Cuban artist Felix Gonzalez-Torres, who created art with everyday materials like light bulbs, paper, and candy; and David Budd: Motion Within Stillness. The abstract artist used spontaneous, viscous strokes of paint to animate the canvas.

Save a full day for The Ringling. It has three museums all located on a 20-acre waterfront property that circus owner John Ringling bought in 1911. One is the State Art Museum of Florida featuring work by European masters Rubens, Van Dyck, Velázquez, and more. Another is Ca’ d’Zan, the 36,000-square-foot Mediterranean-revivalist home Ringling built to honor his wife Mable. The third is the Circus Museum which includes a miniature replica of “The Greatest Show on Earth.”

Catch a performance of the Sarasota Ballet, Florida’s only ballet company, at the Asolo Repertory Theatre, adjacent to the Ringling Museum of Art, or the Sarasota Opera at the historic Sarasota Opera House downtown, a block from Main Street. The Florida Studio Theatre has five stages that provide settings for acts such as Improv, Cabaret, and off-Broadway plays.

Stop No. 2 on your cultural cruise is Tampa. Cruise north under the Sunshine Skyway Bridge into Tampa Bay. Tampa is on the eastern side of middle Tampa Bay. Take the Seddon Channel and head straight to the Tampa Convention Center. It is the most convenient access to Tampa Riverwalk, a 2.6-mile, paved hiking/biking path along the Hillsborough River that takes you to many of the city’s well-known attractions, including the Florida Aquarium, Tampa Bay History Center, Tampa Museum of Art, Glazer Children’s Museum, and the Straz Center for the Performing Arts.

Call well in advance to reserve a slip for a few hours or overnight. The Riverwalk docks at the History Center offer a short-term tie-up option. Or, for longer stays, the Tampa Marriott Water Street has a marina with 32 full-service slips. 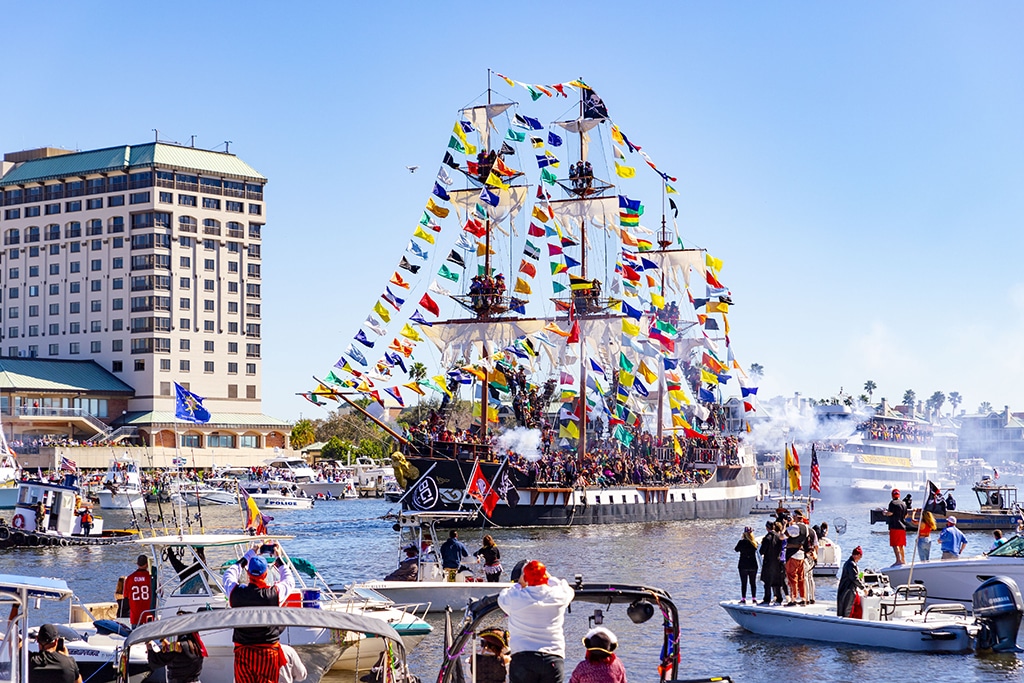 All the slips are booked for the big Gasparilla Pirate Festival on Saturday, January 29th, but you can still become a pirate and help escort the Gasparilla Pirate Ship to the Convention Center. Pirate José Gaspar and Ye Mystic Krewe will meet the mayor and demand she surrender the keys to the city. No worries; it’s only for 24 hours.

Don’t forget to hop on a Tampa Streetcar and take it to Ybor City. It’s where the Cuban sandwich was born. Indulge in one at the original Columbia Restaurant in Ybor City.

When you cruise into the open waters of Tampa Bay, you’ll see the St. Petersburg skyline on the western shore. As you get closer, you’ll notice the new pier. Since the city’s earliest days in the 19th century, it has had a pier in one version or another. The newest one is a 26-acre, come one, come all playground with shops, kayak rentals, a water playground for the little ones, and restaurants to suit all palates and pocketbooks. The pier has a few boat slips for short-term tie-ups, but availability might be limited as there’s no charge and reservations are not required. 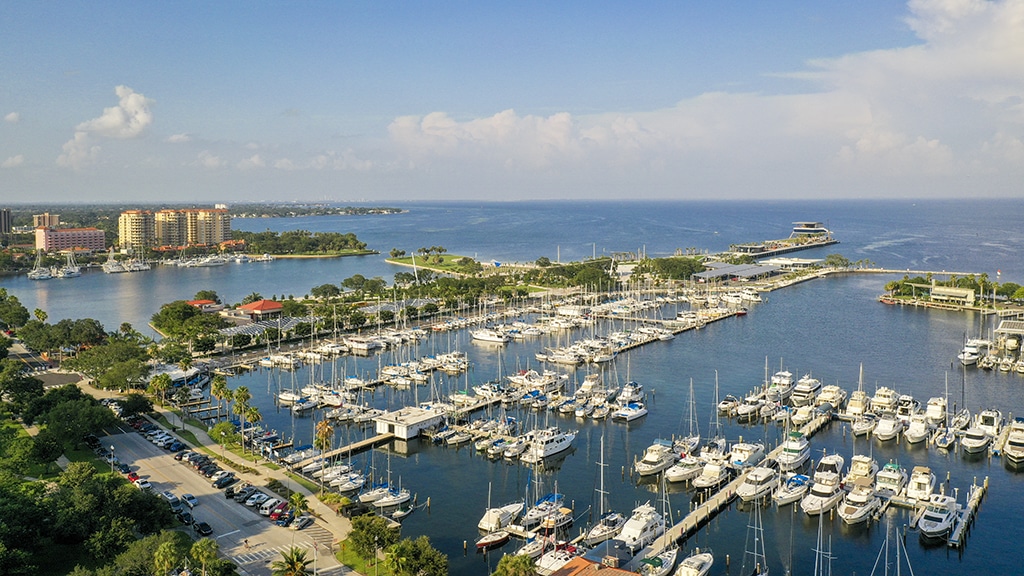 The St. Pete Municipal Marina has recently expanded its spaces for itinerant vessels for the day or several days. Reserve space up to a month in advance. Are you hungry? From the marina, it’s a convenient walk to many different style restaurants at all price points.

Over the years, St. Petersburg has built a stellar reputation as one of the top art centers for any city its size. The Duke Energy Center for the Arts-Mahaffey Theater on Beach Drive is the home of the renowned Florida Orchestra, and it brings in many top-notch entertainers. The January and February calendar includes musical tributes to Tina Turner, Whitney Houston, Carole King, Elton John, and ABBA.

Next door to The Mahaffey is the Dalí Museum. Inside that geodesic glass bubble of a building are more than 2,400 pieces of art and five extra-large masterworks by Spanish surrealist Salvador Dalí, such as The Hallucinogenic Toreador and The Discovery of America by Christopher Columbus.

The Museum of Fine Arts on Beach Drive has masterpieces from Claude Monet, Georgia O’Keeffe, Willem de Kooning, and Robert Rauschenberg. It is also acclaimed for its extensive photography collections.

Other museums worth visiting in St. Pete include the James Museum of Western and Wildlife Art, the Florida Holocaust Museum, the Chihuly Collection at the Morean Arts Center, St. Petersburg Museum of History, Imagination Museum, and the new Museum of the American Arts & Crafts Movement. Some are walkable from the marina. You can also rent an e-scooter to scoot around town. And, downtown St. Pete is bike-friendly. There’s so much to do, so enjoy the Tampa Bay area.