Sharks in the Northeast

That famous quote, uttered by Chief Brody (Roy Schneider) to Capt. Quint (Robert Shaw) in the 1975 movie thriller Jaws serves as a catch-all phrase for being under-gunned. Last summer along the northeast coast, however, it seemed more appropriate than ever in several instances when great white sharks plucked distressed stripers and tuna from the ends of anglers’ lines.

From the Cape Cod surf on out to the Hudson Canyon waters that straddle New York and New Jersey, there were more reports of hooked trophies gobbled by sharks last summer than at any time in recent memory. Such reports numbered in the dozens from surf casters, and one offshore angler claimed a 400-pound tuna was taken in a single bite. Another reported feeling two “bumps” before his line, with an estimated 200- pound bluefin battling at the end suddenly went slack in the vicinity of the Coimbra wreck. Five minutes later, a huge great white appeared parallel to the port side, 50 yards of fishing line trailing from its mouth. The highly experienced offshore skipper estimated the shark’s length at 18 feet.

All this begs the question: Are we seeing more and larger sharks invade northeast waters or simply hearing more about such incidents due to 24/7 news coverage?

“We’ve seen subtle increases in the great white population since they became a protected species in the late 1990s,” says Dr. Gregory B. Skomal, a fisheries biologist with the Massachusetts Division of Marine Fisheries and a leading shark expert. “There’s anecdotal evidence for a growing population; spotter planes are seeing them, anglers are reporting encounters, and we’ve tagged over 150 off the coast of Massachusetts alone. I’m not surprised they’re showing up amongst Long Island’s tuna fleet or even in close to shore.”

Skomal points out that a large great white is a massive animal. “An eighteen-footer would certainly have no problem eating a tuna in a bite or two,” he says. “A fish that’s bleeding and making the right kind of sounds as the fight goes on is a natural target. If a great white gets the chance, he’s going to grab a relatively easy meal. As for actual increases in shark attacks, last summer was a hot one. That means more people in the water, so a greater chance of shark encounters. But I don’t think the numbers were out of line.” 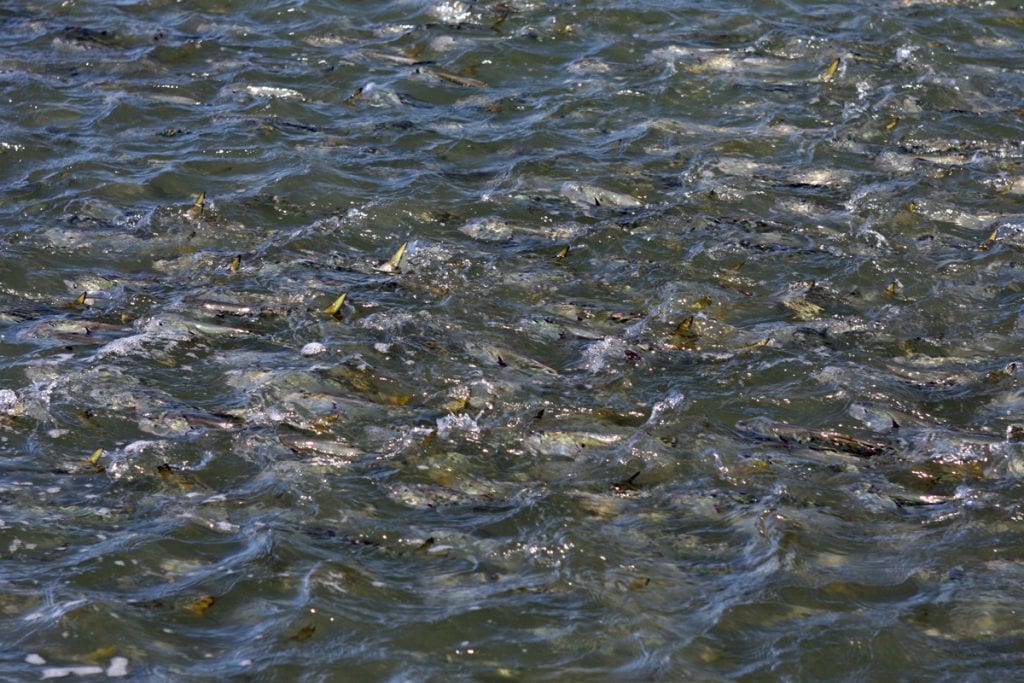 Is an increase in the seal population attracting more sharks to our coastline? “Absolutely,” says Skomal, at “least along the shores of Cape Cod. Sharks are amazingly adaptable creatures. They’ll feed on whatever is available. We also have more bunker [fish] these days, too, so that may be another part of the equation.”

Either way, experts agree most sharks leave northeast waters by late December if not sooner, so we should all be safe until next spring. Then again, the research group Ocearch, together with the Massachusetts Division of Marine Fisheries, tracked a 16-foot, 3,500-pound great white shark they named Mary Lee for 40,000 miles over five years starting in 2012. In 2013, it left the Northeast for southern waters as expected but then returned to New Jersey and Long Island for the last week of January.

Makes you think twice about that polar bear swim.

Food Festivals in the Gulf