Inside the Outer Banks

Cruising the sounds of North Carolina’s east coast is full of adventure.

One of the wildest watery destinations for boaters on the East Coast of the U.S. is North Carolina’s Outer Banks. Boats of all sizes and shapes venture to four main ports along the coast and often turn west into the sounds, rivers, and creeks for small-town diversions and solitude.

Comprising more than 3,000 square miles, Pamlico Sound is the second-largest estuary in the U.S., eclipsed only by the Chesapeake Bay. It’s big water. Navigation, safety, and weather are always the watchwords when venturing to the delightful destinations along the inside and outside shorelines.

The Outer Banks were once defined only as the Hatteras and Ocracoke Islands. Portsmouth Island is considered the Core Banks but has also been grouped into the Outer Banks. Over the years, common usage and marketing has expanded the term to mean pretty much every stretch of sand from the North Carolina/Virginia border south to Beaufort. Then someone decided that Inner Banks might be a catchy title for the coastal region on the western side of the Pamlico. Regardless of what you call them, the ports, anchorages, and waterways are some of the best boating in the U.S.

Choose your destination based on your abilities and vessel. Do not rush. Plan carefully. Running Pamlico Sound can be a slick ride or a pounding that makes you want to be at the dock. The shallow water and open fetches mean that winds over 15 knots will stir things up to uncomfortable levels for all but the largest boats, and there are shoals and shallows that must be avoided. But you don’t necessarily need to run in open water for long to get to your Outer Banks destinations. You have options.

Four ports that beckon for a full-on Outer Banks adventure are Manteo, Hatteras, Ocracoke, and Beaufort. Visited one at a time, or as a complete trip, there are facilities and amenities at each for boats of all sizes. While the Pamlico Sound system is the overall geographical designation of the region, there are several other named sounds through which you will navigate. Albemarle, Croatan, Roanoke, and Core Sounds are shown on the charts and maps, so you know where you are. 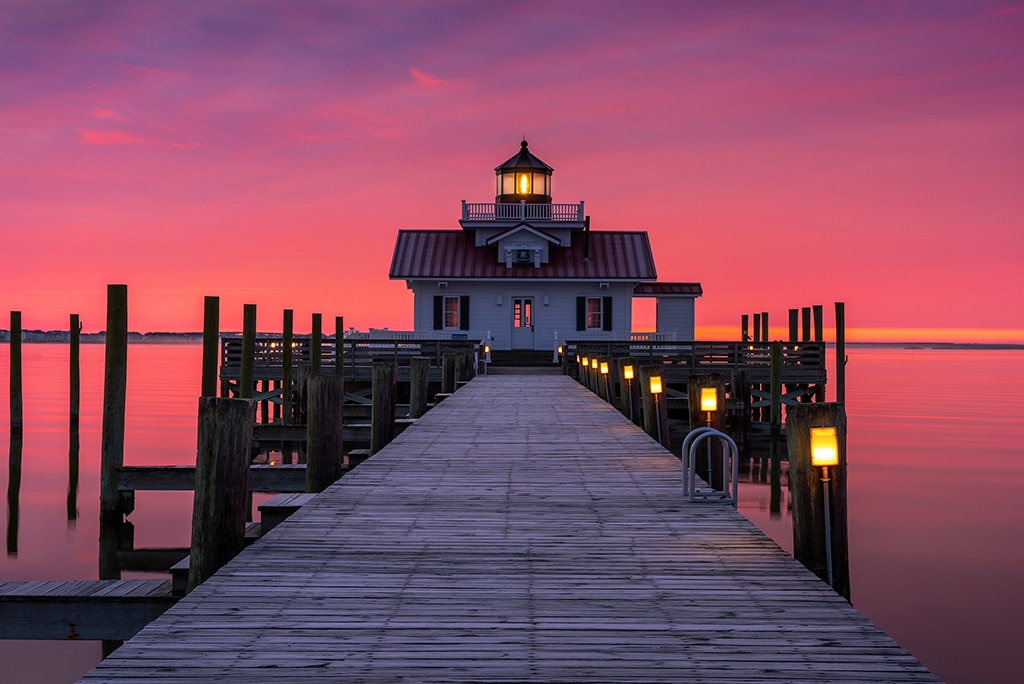 At the northern end of the Outer Banks on Roanoke Island is the town of Manteo. One of the most historically significant locations specific to the European settlement of North America, Manteo’s waterfront and marina can accommodate vessels up to 100 feet with seven feet of dockside depth. Navigation to the harbor from the Intracoastal Waterway (ICW) to the west when you are southbound requires some planning, and there is ample advice available from various sources.

The town has plenty to offer within walking distance, and the oceanfront comprising Nags Head, Kitty Hawk, and Kill Devil Hills is a short drive east. You can spend weeks here exploring, eating your way through superb restaurants and visiting America’s history. 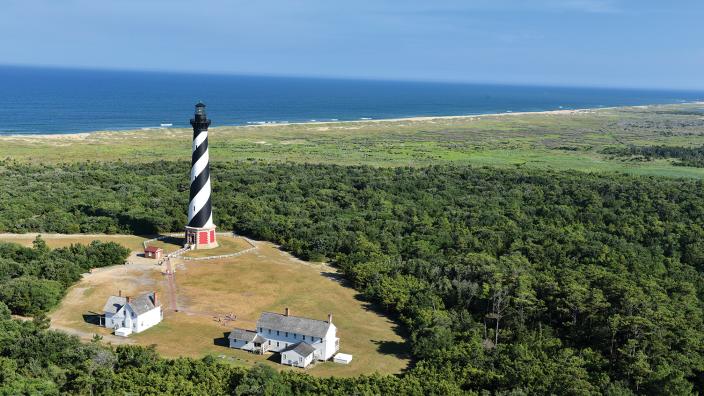 Forty-five nautical miles south of Manteo is Hatteras. Home to commercial and charter fleets, the harbor has room for transient and visiting vessels at several marinas as well as a boatyard for services or maintenance. If you arrive by boat, plan ahead. You will need transportation to get to the few restaurants and grocery stores on quaint Hatteras Island. The National Park Service maintains the Hatteras Lighthouse and Visitor’s Center, and there are plenty of campsites, some B&Bs, and a hotel or two. Hatteras Island is a long way from anywhere, but worth the trip. 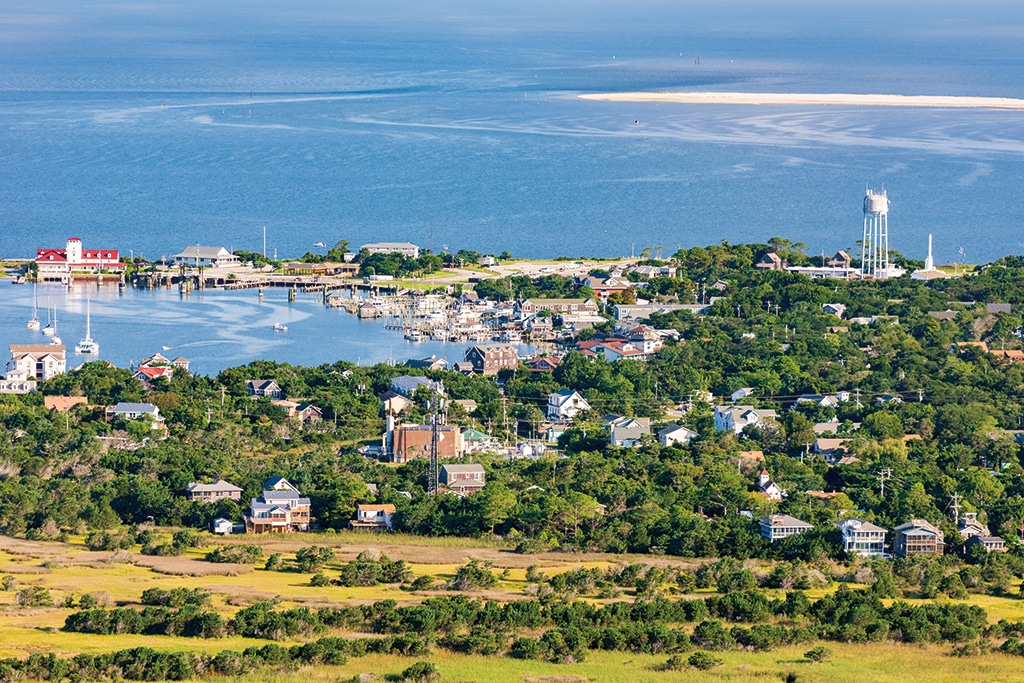 In order to make the next port of call, you will need to run about 25 nautical miles to avoid shallow water and shoals. Ocracoke Island and the little town of the same name is a favorite for boaters and landlubbers alike. The island comes alive in the summer for families and travelers wanting to get away from it all. Miles of beaches, some great little cafes, a brewery, and gift shops keep the island vibrant. There are only a few marinas and an anchorage in the harbor known as Silver Lake. Golf carts and hoofing it are the primary means of transportation. Provisions are easy to come by, and you may find yourself spending a week or more lolling about in the southern sunshine and breezes. Call the marinas and docking facilities in advance as space is limited. 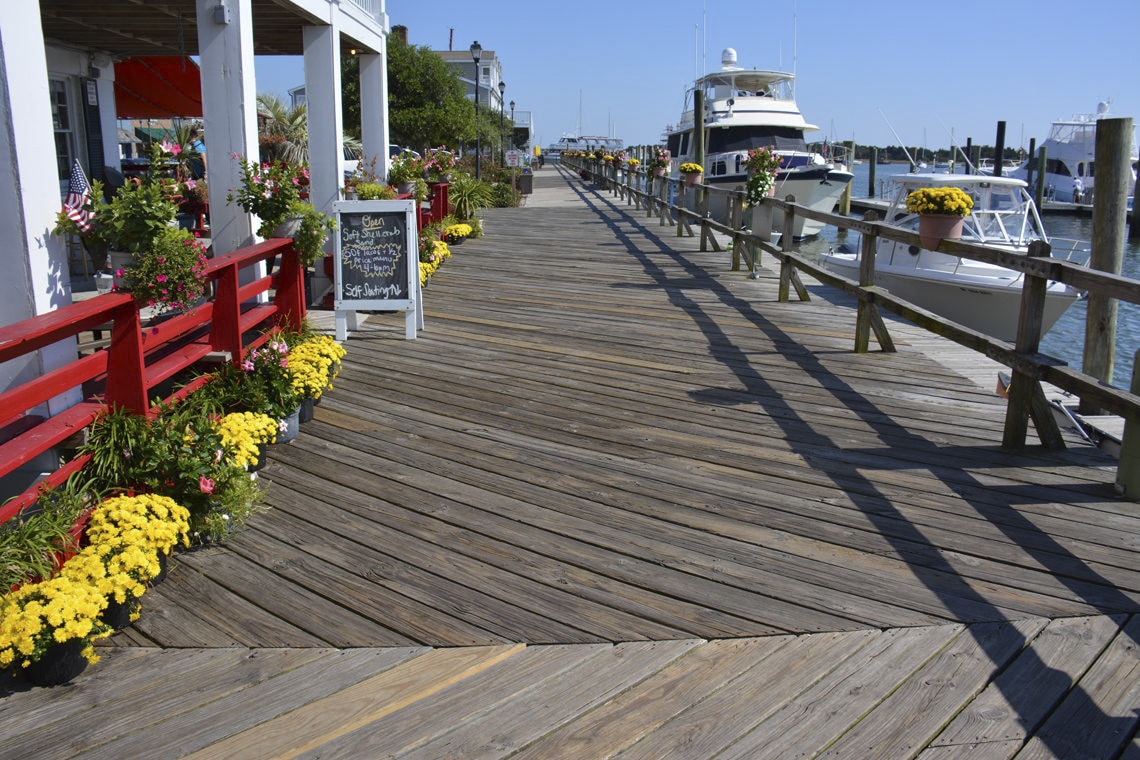 Fifty nautical miles farther southwest is Beaufort and Morehead City. Using either Core Sound (with local knowledge only) or crossing the southern end of Pamlico Sound to take the ICW inside will get you there. Beaufort and Morehead are reachable via Core Sound, but locals and adventurers are probably the only ones who should try based on several factors. It’s skinny water, but it’s not totally impassable. The big boats don’t go there, but everyone doesn’t own a big boat. Beaufort is the quintessential ICW town with plenty of marinas, restaurants, inns, and a waterfront vibe that’s pure North Carolina nautical. A favorite stop for many making passage on the ICW, Beaufort—and its next-door neighbor Morehead City—will keep you entertained and also offer protection from weather and wind.

Navigation advice for these destinations abounds. There are several important considerations when planning a visit to any of these Outer Banks locations. First, from which direction are you leaving? Second, what size is your boat? Third, what is your experience and comfort level?

If you travel from north to south and visit each destination in order, then the mileages and suggested routes will get you there with minimal stress as long you watch the weather and have a well-found vessel. Albemarle, Pamlico, Croatan, Roanoke, and Core Sounds will beat you up if you don’t pay attention. Summer thunderstorms and passing fronts are not to be disregarded. The Bermuda High dominates in the summer and southwest winds of 15-20 knots may last for days. But, as stated earlier, you have options.

You can visit two of the destinations without spending too much time in open water. Manteo and Beaufort require less open-water navigation than Hatteras and Ocracoke. Beaufort can also be reached via the ICW canals, rivers, and protected portions of the Pamlico. If you are in a sailboat and relish 15-20 knots, then sailing the sounds to the true Outer Banks towns of Hatteras and Ocracoke is a breeze, but watch the depth sounder. Many large vessels go outside and come in at Hatteras Inlet for visits to Hatteras and Ocracoke, and Beaufort Inlet for that location. Avoid Oregon Inlet unless you have local knowledge or the confidence of following the charter fleet that comes and goes daily when weather permits.

If all of this sounds daunting, then there are many towns, marinas, and anchorages on the western side of the Pamlico that can keep you cruising all season ducking in and out of protected harbors with enchanting waterfronts, restaurants, and shops for provisioning.

Five Indicators on when it's Safe to Invest