“We are pretty well confirmed to be definitely moving. We are not going to be in The Bight [but] at Great Harbour on Peter Island,” said Willy T owner, Ewan Anderson.

He made the announcement following a meeting with the government on May 14th.

“It will be ok. It’s another location, it’s on the water, and it’s good for tourism — good for Great Harbour. We are happy that we can move somewhere as opposed to closing down the business. So, yes, we are happy and the government is helping us to avail that situation,” he added.

Anderson then described his discussions with the government as ‘helpful’ and that Willy T’s required permits are now being processed in order to resume operations.

Southern Boating for one, is happy the legendary boat found a new home. Who among us hasn’t traveled to the islands, had a little too much fun at Willy T’s and fallen asleep on an aft deck cleat? Or woken up to find their hair replaced with a banana peel? Oh, just us… 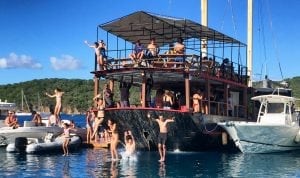 A brief history of the Willy T:

The first Willy T was located in the southwest corner of The Bight. This always popular “bistro on the briny” can take credit for at least some of the popularity of the anchorage.

The original (wooden) Willy T was a 1935, Baltic Trader. After a little more than 6 years of restaurant service, she sprung a leak in the middle of the night. The bilge pumps weren’t able to keep up with the volume of water and the original William Thornton sank on her mooring on June 11, 1995.

She was subsequently raised, hauled out to sea and sunk again in the hopes of making a new dive site. Unfortunately, weather conditions quickly tore her apart and there is nothing left of the old William Thornton today.

But you can’t keep a good man down! Mick and Ewan jumped on a plane for Florida to find a replacement. The 100′, steel hulled replacement was soon swinging on her mooring and open for business by January 6th, 1996 where she remained until September 2017.

And now the legend continues.