Winter weather in The Bahamas is a relative term, particularly for those who don’t live in the southern hemisphere.

“Winter” is definitely the time to experience the culture and social life of the Abacos, but don’t rule out boating because of the windy season. Winter Weather in The Bahamas can be a toss-up. It’s no match for the barrier islands that protect the archipelago’s main boating thoroughfare, the Sea of Abaco.

The Abacos fall inside the northern trade winds that regularly bring heavy, gale-strength winds between December and February. It’s not uncommon to encounter squall lines and cold fronts blowing down from South Florida. Water temperatures can drop down to 72 degrees, which is still cozy for northerners, but quite atypical of the quintessentially warm and sunny Bahamas seas, usually 80 degrees and warmer.

On account of the winds, crossing the Gulf Stream and boating activities on the ocean side of the islands can be hit or miss during the winter. This means that some boaters opt to fly over and source a boat locally for the holidays. It also means that some boaters, particularly those on the tail end of a long stay, might be stranded until they find a clear weather window. 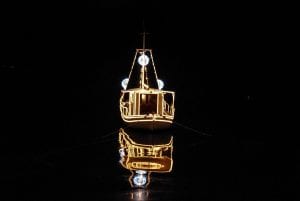 “You might see twenty-five to forty boats sitting in the anchorage ready to jump across, just waiting on their weather window,” says Capt. Donnie Sawyer, owner of Donnie’s Boat Rentals. “The cold fronts come down and behind the cold fronts there are gale-force winds, twenty to thirty miles per hour. It shuts the Gulf Stream down. The forecast would say small craft should exercise caution because seas are six to eight feet in the Gulf Stream. It can be dangerous to cross; sometimes you can’t do it, period.”

Winter weather in The Bahamas is also a reason to manage your fishing expectations. Steve Kappler, general manager of Treasure Cay Resort put it bluntly. “It’s cold, it’s windy and it’s not good for fishing. The good fishing starts around March, April, and May.”

With a streak of good luck, however, it is possible to find a three-to-five-day stretch of good winter weather in The Bahamas for fishing. But most times, according to Capt. Sawyer, “If you come on a week’s vacation, you might get one day out of seven to go out. You could come again and there is wind blowing at twenty to twenty-five knots for all seven days. It’s not an ideal time for fishing.”

This doesn’t deter everyone. Capt. Wade Cash, the owner of Sunset Marina Boat Rentals, says the windy weather predictions around Christmas time have not always held up in recent years.

“I have certain groups who come in every single year around Christmas just to fish. They are out on the water from dusk ’til dawn fishing. [Some will rent] a twenty-six- to thirty-one-foot center console boat from us,” he says, and makes the point, “There are a lot of windows.” Cash adds that December can be hit or miss for fishing, but it’s a good time for the wahoo bite and mahi-mahi.

Protected Waters for Winter Weather in The Bahamas

Even when the Gulf is impassable and the ocean is raging, the good news for boaters is that boating within the Sea of Abaco, amongst the many inhabited and uninhabited barrier islands, can proceed largely uninhibited during the windy months.

Great Abaco is a 100-mile-long island. About three to four miles off the mainland, running parallel, are barrier cays. These little islands stretch for about 75 miles. Between Great Abaco and the cays is the Sea of Abaco, a shallow saltwater highway with many boat harbors and sounds.

Among these cays, there are many year-round attractions tucked away on the leeward side, most notably, the beach aquarium where you can enjoy animal interactions with wild turtles, stingrays, and the iconic swimming pigs.

In addition to these mainstays, the islands are full and festive during the holiday season, which means extra opportunities to experience the culture and social life on land. This works out for many boaters because the main draw for the winter season, even among the most hardcore, is the holiday festivities.

“I might be a bit partial, coming from Green Turtle Cay, but the entire New Plymouth settlement comes alive with people at New Year’s,” says Capt. Cash. “We have a Junkanoo parade on New Year’s Day, and we get all of the boats coming in from the surrounding islands. You might have a thousand people on the island. There are food vendors all over the street. There are bars open. It is a very festive time.” 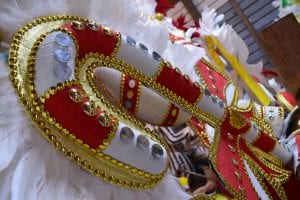 Green Turtle Cay is only three miles long and a half-mile wide, so the entire island is essentially one big festival during the new year.

“Bringing in the New Year is the same thing. On New Year’s Eve you can go and have dinner and attend one of the parties going on,” says Cash. “Some of the local resorts have events. People leave from those events and come into the settlement where you have bands playing music and deejays. Pretty much all night long, people are roaming the streets. We have an annual Festival of Lights, so the entire settlement of New Plymouth is decorated.”

CHRISTMAS EVENTS IN THE ABACOS

Basil’s Bar is back