The national parks on San Salvador Island are now a reality.

It is widely believed that San Salvador Island is where Christopher Columbus first stepped ashore in the “New World” on his first expedition in 1492. There have been scientific studies using computer simulations of wind and water currents as well as scrutiny of the log’s copy and its measurements that lead to Samana Cay and Plana Cays, but without concrete evidence or actually being there when it happened, San Salvador remains the popular choice.

Columbus made landfall in Guanahani, the island’s original name, on October 12, 1492. However, Columbus renamed the island San Salvador in thanks to the “Holy Savior.” In the 17th century, the island was known as Watling Island until 1926 when it was renamed San Salvador because beliefs at the time concluded that the island was the actual landfall location. The name was taken away from the present Cat Island which some thought was the first landfall.

The Lucayans made up the population back in 1492 who lived by fishing and through agriculture. Within a few years, they were taken into slavery to Hispaniola and
were all but gone from The Bahamas by around 1513. The islands were somewhat deserted after that until around 1648 when English colonists settled on  Eleuthera. The islands were an ideal hideout for pirates, but order was restored when The
The Bahamas became a British colony in 1718. American Loyalists were settled in The Bahamas after the Revolutionary War and in the 1820s when Florida ceded from Spain to the United States, African slaves and Seminoles fled to the islands. Slavery was abolished in 1834.

The Bahamas played its role during wartime, particularly when enemy forces tried to stop oil shipments from Venezuela and the Gulf of Mexico. During the Cold War, Naval Facility
San Salvador was commissioned in September 1954 partly to track Soviet submarines. Located on the north side of the island, the station was decommissioned in January 1970 and is now the Gerace Research Centre.

San Salvador Island is an exposed peak of a submerged mountain that rises 15,000 feet from the ocean’s floor and has one of the most unique-looking landscapes in The Bahamas. The land is full of undulating hills, beautiful beaches, numerous saltwater lakes, and amazing reefs that surround the greater part of the island.

The shelf surrounding the island reaches up to 131 feet deep, then abruptly drops to around 2.5 miles deep. The “Land of Lakes” has at its center Great Lake which stretches the length (10 miles) of the island and is two miles wide. The numerous lakes on the island connect with each other and were the primary way to travel between settlements. A paved road now encircles the island and the lakes are left to their own habitat which includes several species of birds, such as the Yellow Warbler. Breeding seabirds are drawn to the cays around Grahams Harbour on the northern shore. The lagoon is also popular
to snorkelers where they can spot hundreds of fish species.

Birders will find abundant frigatebirds, tropicbirds, and shearwaters along San Salvador’s shoreline. The western coast is on the island’s lee side and has steep drop-offs and wall reefs that make it the perfect spot for scuba divers. Riding Rock Resort & Marina has a dive staff to accommodate any level of experience. The full-service marina provides easy access to fish the deep waters for blue marlin, dolphin, wahoo, and more. Boats up to 140 feet with an 8-foot draft (at low tide) can take advantage of fresh water, fuel, electric
hook-ups and the like before heading back to the mainland or cruising other islands and beyond.

San Salvador Island sits east of the Great Bahama Bank on its own isolated limestone platform lined with rocky and sandy shorelines. Its distance from the major shipping routes and tourist destinations has kept its ecosystem somewhat untouched.
The Gerace Research Centre on the north side of the island is a field-based classroom that offers housing and labs for researchers, teachers, and students interested in geology, biology, ecology, archaeology, and the marine sciences. 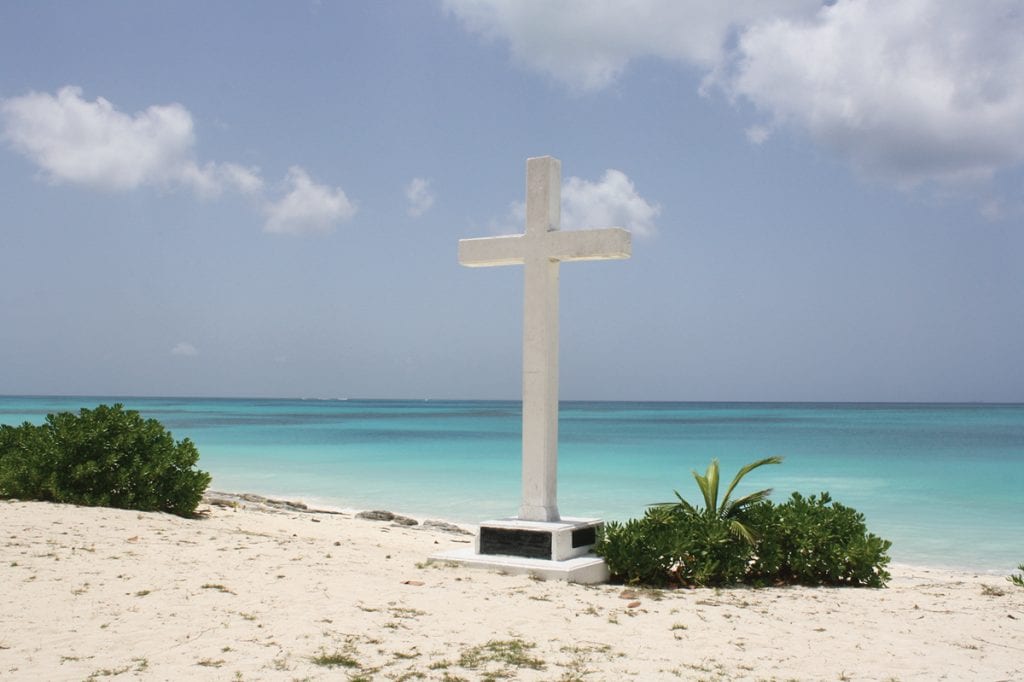 The Bahamas National Trust is working with a local nongovernment organization to establish a national park system on the island to preserve its fragile ecosystems. Five areas were identified in 2015 and are now formally approved as the San Salvador National Parks. In October 2018, the National Trust signed a shared management agreement with the San Salvador Living Jewels Foundation to care for and promote the “living jewels” of the island.

San Salvador is home to many monuments, ruins, and shipwrecks, which reflects its rich history. This includes an underwater monument that allegedly marks the spot where the Pinta dropped anchor. The island’s reefs, cliffs, inland lakes, and vegetation are spectacularly diverse, which is why the parks were established.

This park area includes the Great Lake on the interior of the island which also includes the mangroves up to the highwater mark. There are at least three different types of reptiles
living on the islets within the Great Lake, including the highly endangered San Salvador Rock iguana. Many birds call the island home, including some herons and cormorants. Now, the nesting ground is protected.

Pigeon Creek is the islands’ only is the only tidal body of water that flows into an inlet. The mangroves and seagrass beds make it the perfect nursery for all kinds of juvenile marine life from groupers to starfish, stingrays to sharks and turtles. San Salvador, isolated from the Bahama Banks, relies on Pigeon Creek and Snow Bay for fisheries replenishment.

Graham’s Harbour Iguana and Seabird National Park This park area with its extensive seagrass and eelgrass beds as well as coral reef serve as a very important breeding ground for conch and other marine animals. It also houses a number of cays, such as Green Cay, home to the largest population of San Salvador Rock Iguanas, and the Cato, Gaulin and White Rock Cay nesting sites for migrating sea birds. San Salvador
has more species of sea birds nesting on and around these Cays than any other Island in The Bahamas. 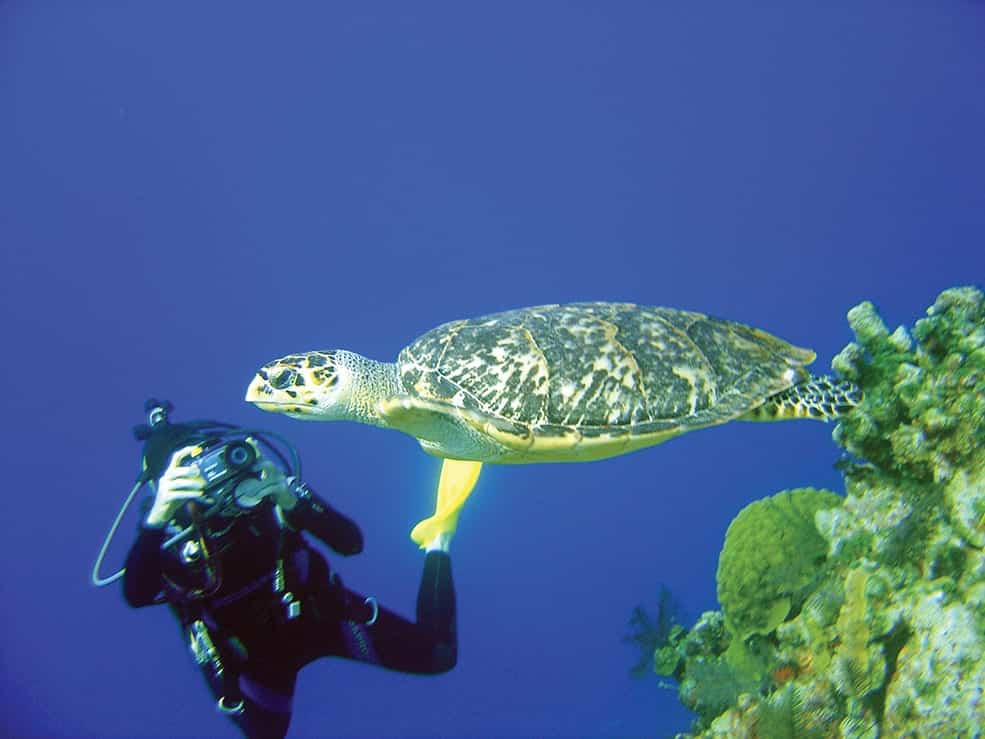 For over 40 years, San Salvador has been a dive community. It was once ranked number three for diving spots in the world by Dive magazine and Scuba magazine. Designating this site for protection ensures an increase in the fish populations within the area which means more for the divers to see, increased tourist dollars to this already lucrative market and ensuring further stimulation of the island’s economy.

This area protects a major iguana population on Crab Cay. Its rocky shoreline also helps to protect visiting white-tailed tropicbirds and Audubon’s shearwaters. The peninsula
protects the reefs from potential dangers from Storrs Lake, a salt pond, which should open to the sea.

These five areas of ecological importance will allow the preservation of the island’s natural habitat and ecosystem as well as provide nature seekers, divers and snorkelers, fishermen, and naturalists an opportunity to learn, experience and enjoy the best of The Bahamas in one place.

By Jeremy Peters, Southern Boating May 2019

Birds in The Bahamas