The Little Sister with the Mighty Roar

Leopard 46 Powercat, the second model in the series, does not disappoint.

Only two years after the launch of the Leopard 53 PC (a completely re-thought powercat model at the time), Leopard Catamarans introduced the Leopard 46 PC, a smaller—but equally impressive—sistership. The two were parked side by side at the recent Miami boat show, and I was urged to visit one right after the other to compare.

“You’ll see that the 46 feels nearly as large as the 53,” says Franck Bauguil, Leopard’s vice president of yacht sales and product development. “They’re remarkably similar despite the seven-foot difference.”

I took his advice and toured the 53 PC first. It’s significant and stout and lacks for nothing in terms of comfort. Then I stepped aboard Hull No. 1 of the 46 PC and realized Bauguil was right. The 46 PC borrows design elements from her bigger sibling and does wonders with her 46-foot by 24-foot platform.

South African builder Robertson and Caine have been building catamarans for 30 years and with that kind of longevity, they’ve seen and done it all. Like most cat builders, they’ve taken sailing cats in the past and modified them for power. With the 53 PC and the 46 PC, they took another tack and designed these two for power applications from the keels up. It makes a difference. 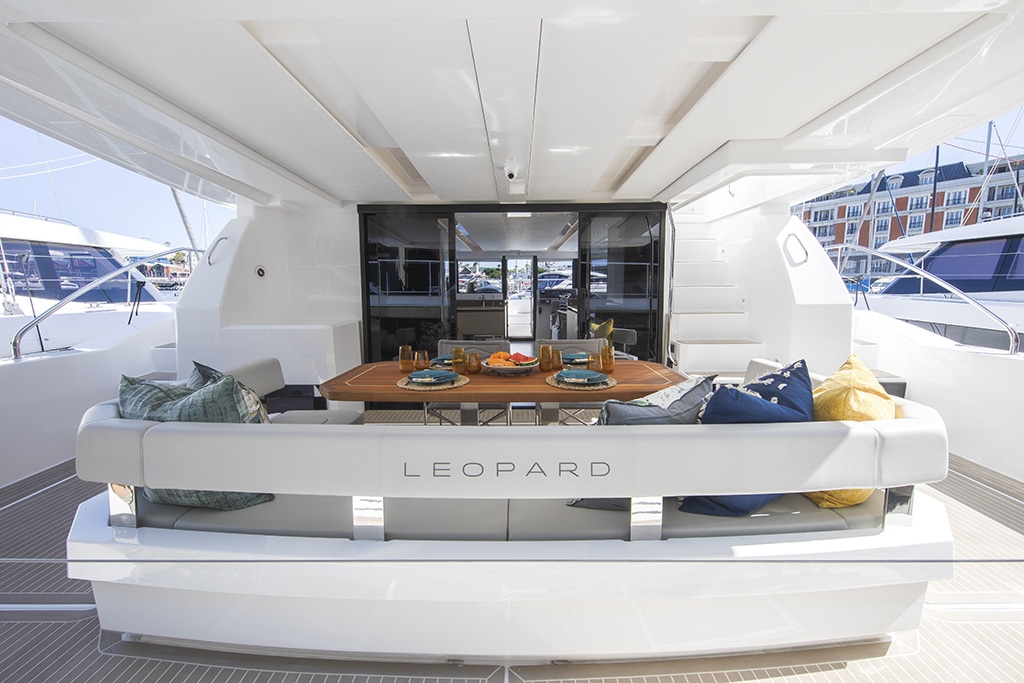 Three steps bring you from the swim platforms to the aft cockpit, most of which is taken up by a large dinette. This is a design departure because most cats have ample seating and lounges here. The factor for more gating structure is the result of the enormous engine room hatches on either side that can’t be topped with furniture, so the dinette is tucked in between. Also, it’s expected that other than dining, most outdoor entertaining will be done on the flybridge, so why duplicate the spaces?

There’s still lots of space behind the dining settee to walk from one side to the other or manage the tender. Davits are offered, but the optional hydraulic platform is more versatile and creates a teak beach at the waterline.

Starboard-side steps lead up to the flybridge, or you can walk up either side deck to the bow where you’ll find twin sunbeds and plenty of room to work the windlass. 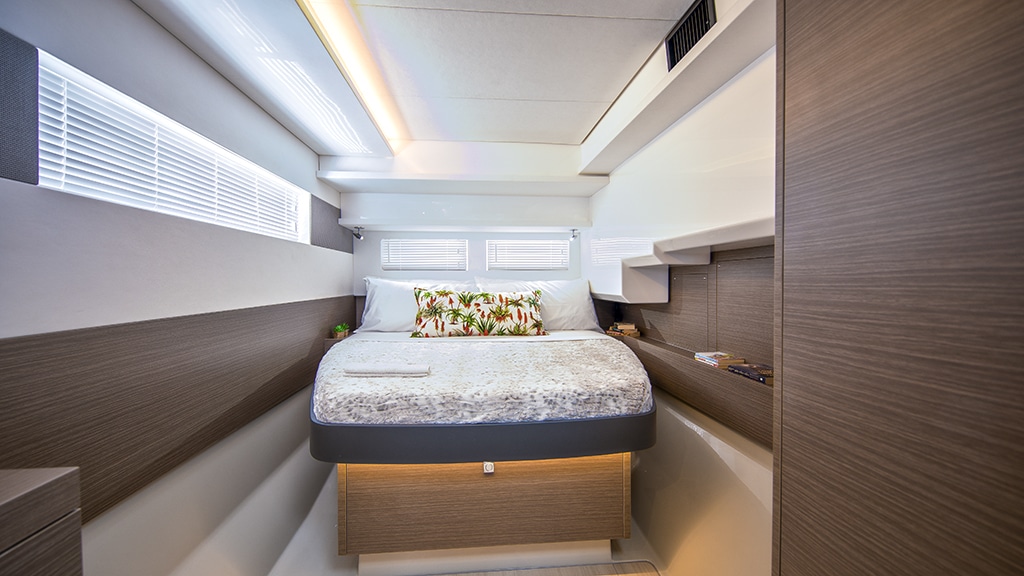 The Leopard 46 PC is available with three or four cabins and a matching number of heads. The owner’s version places the master along the entire starboard hull with a longitudinal bed aft, a desk amidships, a large closet (it can’t be called a locker), a head with twin vanities, and a huge shower in the bow. (FYI: For those who like spacious bathrooms, this head takes up nearly a quarter of the LOA so you won’t feel hemmed-in.)

The breaker panel sits alongside the steps down to the master cabin, so the owner doesn’t have to go far in the middle of the night to turn systems on/off or to check on the state of the batteries. A lower helm is optional and may be interesting to those who venture often into more challenging climates. 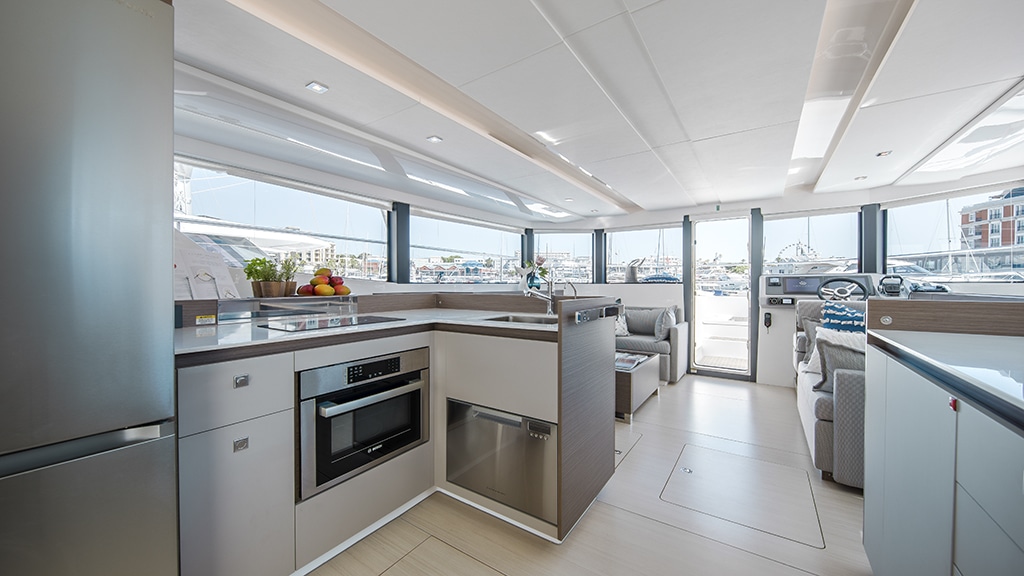 The salon redefines “open layout.” Not only is the aft galley well integrated into the salon itself, but also the forward door brings the outside in with a fresh breeze and plenty of light. Leopard’s traditional forward cockpit has been taken over to make a larger salon. However, you still have the twin lounges where you can hold happy hour when the sun is beating down on the aft cockpit as you swing on the hook.

The surrounding windows in the salon seem larger than on previous models and are made of tempered glass which, besides strength, offers better clarity. Lounge areas include the L-shaped settee to port with a straight sofa to starboard, just behind the optional lower helm. (There is no specified companion seat.)

The galley has a two-burner Kenyon induction cooktop and a Bosch convection oven below. The refrigerator/freezer are household-sized, and there are options for an icemaker, microwave, and dishwasher. To starboard is a serving area with cutlery and dish lockers, an integrated bottle locker, and space for an icemaker or bottle cooler all topped with ample counter space so the chef never has to work alone. The aft glass door opens to nearly 50 percent creating a seamless transition to the aft cockpit which is perfect when serving a meal.

Leopard notes that this series highlights “powerboat styling,” including more indirect lighting, larger hull windows that result in brighter cabins below, wider staterooms, cleaner lines, and a finish in matte greige that is very popular on motoryachts in this class. “The 46 borrows heavily from the innovations brought to the 53,” says Katie Baker, yacht sales marketing manager. “The focus is on luxury and comfort.”

There’s also an easy-living flow aboard this model that connects the sunbeds on the bow with the salon, and the galley with the aft cockpit, all within just a few steps and two doors. You can’t get this much space on a monohull motoryacht of the same length, and the stability of twin hulls means no gyrostabilizer is necessary to keep everyone comfortable day and night.

The cockpit may be focused on dining, but the entertainment star is the flybridge where everyone will want to lounge and take in the fabulous views. To port is a companion bench for three, amidships is a U-shaped dinette that will accommodate up to eight with additional chairs, and aft is a large sunpad for up to three. Starboard aft is open space that can be used for extra lounge chairs and just ahead is a galley module amidships with a sink and an optional fridge and a grill. 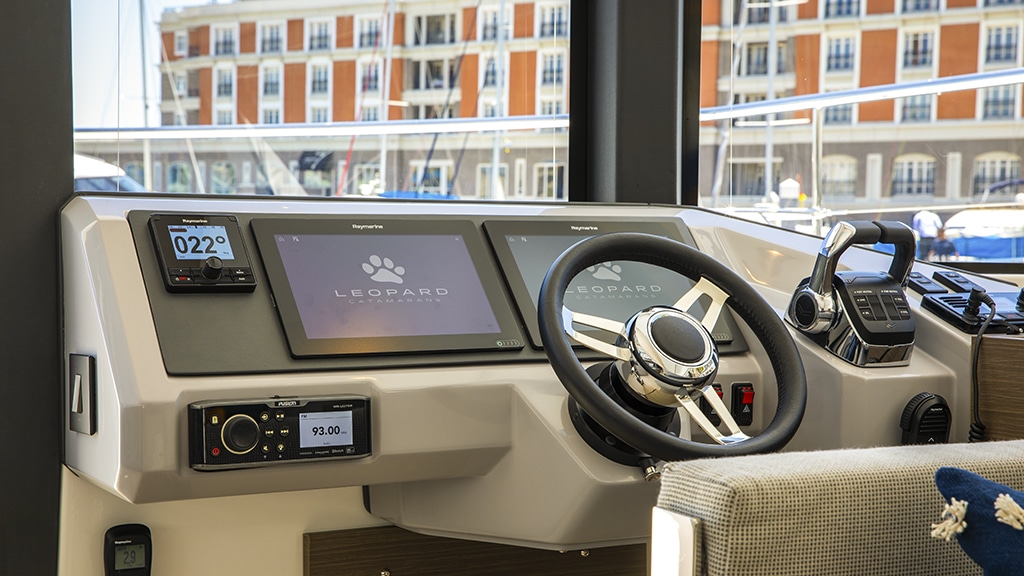 There’s a lower helm on this model to starboard equipped with twin 16-inch Axiom Raymarine MFDs and autopilot, Yanmar engine controls and displays, and a bench. Sightlines down the starboard side are excellent so you’ll want to dock on that side, if possible. Visibility forward is good, but the aft is blocked as it is on all flybridge models; however, Leopard offers two optional cameras (forward and aft) that integrate into the MFDs. Docking with the backup camera is only a matter of getting used to it just like in your car.

Because the 53 PC and the 46 PC were parked next to each other, it was easy to compare the size of their respective flybridges. To my eye, they were nearly identical. Bauguil confirmed that one is just a bit smaller than the other, but it speaks volumes that you can hardly see the difference even with such a close comparison.

I tested the 46 PC with the upgraded 370-hp engines in 15 knots of breeze on very lumpy waters just outside Government Cut in Miami. We had a crowd aboard with 15 on the flybridge alone, and both the water and fuel tanks were 70 percent full so the boat was heavily loaded.

The bows have a narrow entry to easily split the oncoming water, but they’re stepped above to create greater interior volume and more comfortable cabins. The propellers are ensconced in tunnels to improve speed, and the Yanmar diesels are contained within soundproof engine rooms that are farther from the living spaces to reduce noise and vibration.

The 46 PC is very maneuverable as you’d expect with engines set so far apart. However, it’s a lot of boat so although it’s not strictly necessary, some may find peace of mind with
the optional bow thruster. 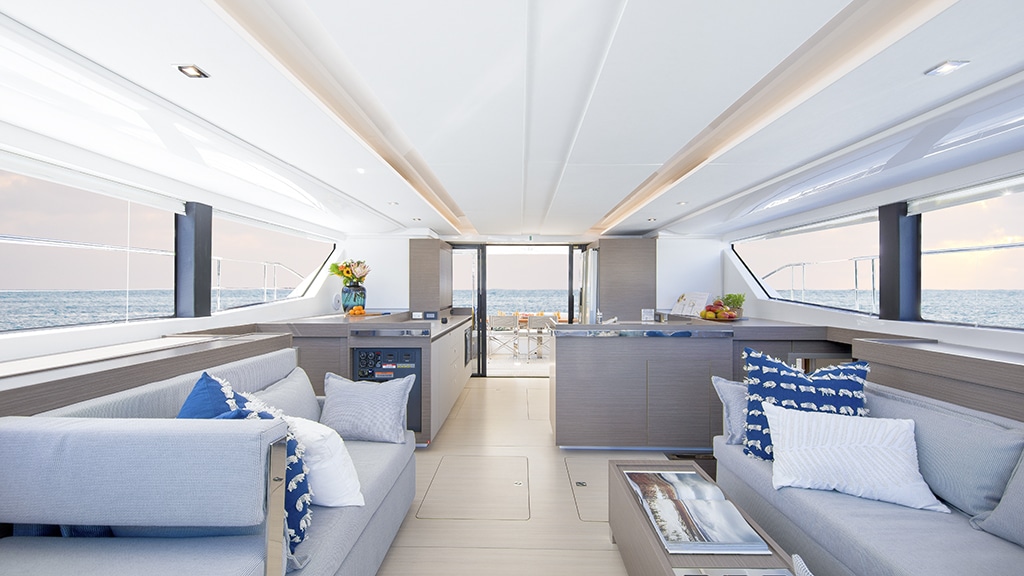 A Lot to Recommend It

Bauguil says Leopard is in the process of fleshing out its powercat line so the 46 PC doesn’t replace a model, it just adds to the offering. Approximately 50 percent of the upcoming Leopard 46 PCs will go into charter while the other 50 percent will be sold to private owners.

If you’re in the market for a new yacht, consider a powercat and perhaps add the Leopard 46 PC to your shortlist. If you’d like to try before you buy, keep an eye out for one in charter at an exotic destination via The Moorings. You won’t be disappointed.

8 Ways to Smooth Out the Stock Market Ride