The Marlow Prowler 375 Havana handles the need for speed with remarkable style and performance.

Let’s begin with a bit of history to better understand the premise of the yacht at hand. Back in 1919, the U.S. government enacted the National Prohibition Act to carry out the intent of the 18th Amendment, passing the “great social and economic experiment” of the time, so said, President Herbert Hoover. Prohibition, which took effect in 1920, was a period in U.S. history that banned the manufacture, transportation, and sale of intoxicating liquors. Although supported by the temperance movement, prohibition was difficult to enforce, and illegal production and sale by bootleggers flourished. This also spurred the growth of illegal drinking establishments called “speakeasies” and led to a rise in overall violence and crime.

Also, on the rise were the Florida “rumrunners,” nefarious boaters who smuggled in hooch, mainly from the islands. Whiskey and rum were the favorite elixirs that came from the Bahamas, Caribbean, and notably, Cuba.

All types of vessels were used, from schooners and freighters to motorboats and yachts. The key was to not get caught but also to outrun the law. Based on the needs to create a fast boat that can handle skinny water with exceptional seakeeping ability (especially when loaded down), David Marlow designed the current day Prowler 375 Havana, but not for rum-running purposes.

As one entry into the Prowler line (introduced in 2005, the Prowler line also includes the Open, Express Cruiser, and Classic models), the Havana has an allure of bygone days and a spirited excitement when behind the wheel.

Don’t think that Marlow skimped on the smaller brethren when compared to his larger yachts. The same quality building process, fine woods, materials, and overall Marlow craftsmanship are incorporated into each Prowler. 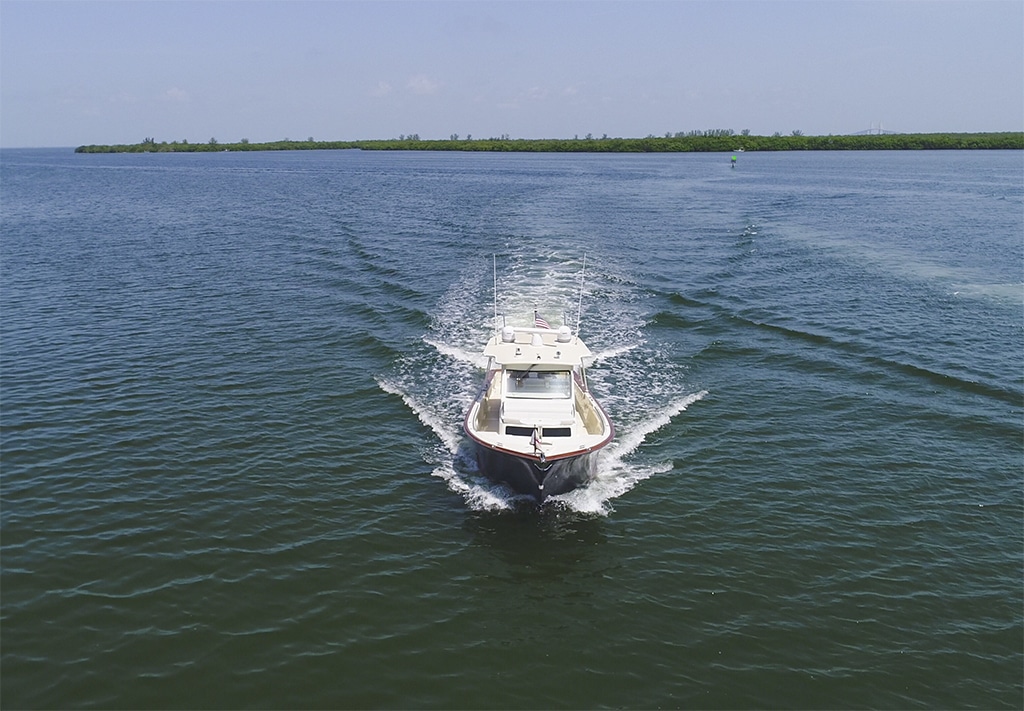 Additionally, Marlow went beyond the center console style of original rumrunners with the Havana and added fine accommodations in the lower cabin that include a galley and private head, and copious amounts of room on deck for cruising or fishing along with an enhanced helm station. It’s also a perfect yacht to sit at anchor and enjoy a cool rum punch at sunset.

For the rumrunners of yesteryear, their crafts had to be ready for any sea condition in order to deliver the abolished gold. Marlow designed the Havana the same way. The hull is a beefy, ocean-going machine with generous bow flare, lifting strakes, sharp entry, and modified-V hull to maintain speed into head seas or over the chop.

With a downeaster sheer line and high freeboard, forward-sweeping lower aft, the Havana exemplifies the needs of yore with the elegance of current. Accentuating the flag-blue hull are gold trim and boot stripe.

It’s evident throughout the Havana that Marlow has carefully, yet creatively, carried the virtues of the big yachts to this smaller platform. A large, fiberglass hardtop and three-sided fiberglass window frame are integrated into the house structure and supported by a tubular frame that is securely bolted to the structure in multiple spots to create a solid enclosure. The forward windshield is a single pane, tempered glass with an overhead wiper. Frame supports run laterally across the underside of the hardtop and provide handholds all around. Hang bimini curtains to the side and aft and this machine is an all-weather operation. Even with a slight bow rise when getting up to speed, forward visibility remains good thanks to the high helm seats.

With some deft styling, Marlow blends the cabin design into the hull so it’s not obtrusive to the profile which maintains the intended charm of this model. Through a portside door is the lower cabin, and it’s more than just a place to use the head or change outfits. Forward is a large V-berth which helps make the Havana more of a weekender than just a picnic or day boat. Midship are two large opposing settees, thickly padded and suitable for sitting or lounging. A drop-in teak table creates a dining area for four or six people.

Fixed windows along the side and forward allow for ambient lighting as does the forward egress hatch. Teak wood is used throughout the interior for walls, shelves, and trim, and the teak and holly flooring is the same as used in larger Marlow yachts. A flat-screen TV is mounted to the wall, while air conditioning keeps the environment nice and cool. 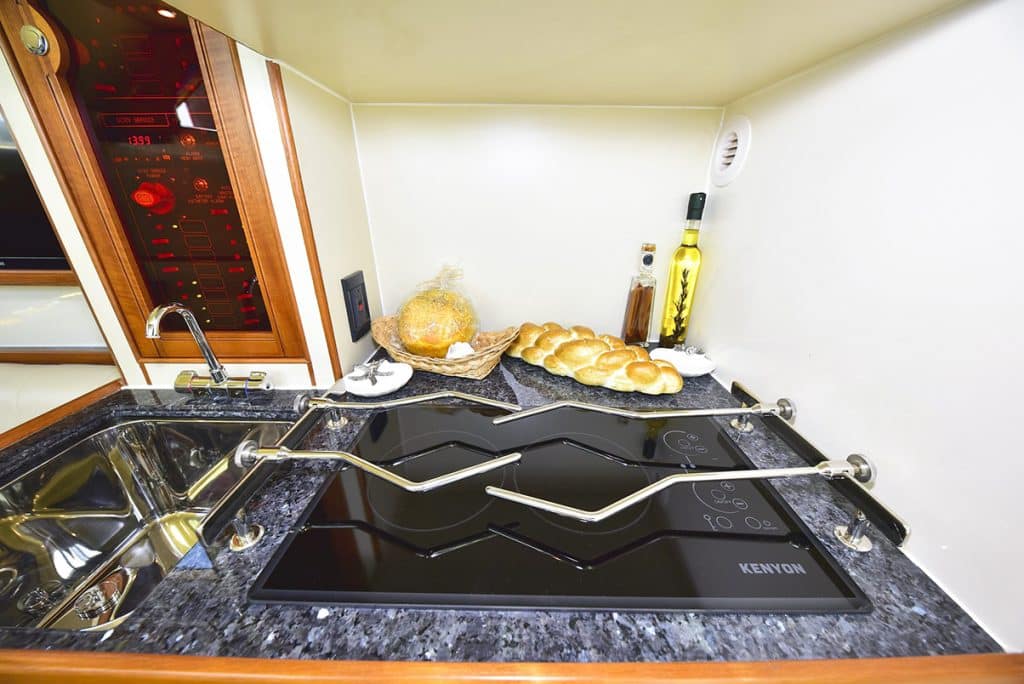 Meal prep is easy thanks to the galley station. A two-burner Kenyon cooktop with potholders is next to a deep stainless steel sink. Above is a Sharp convection microwave oven for a quick reheat and below is a U-Line under counter fridge/freezer unit. A Bluewater desalinator can produce up to 450 gallons of freshwater daily.

Next to the galley is a full-height breaker control panel behind a glass door with all the switches, gauges, and monitors needed to operate the 375 Havana. It’s a plethora of controls, but I would expect nothing less from Marlow, and it’s at eye level, so there’s no getting down on hands and knees or ducking into a closet to set a breaker.

An aft private head features a Dometic toilet, Grohe shower and sink faucets, vanity with granite counter, and a curtain and recessed drain under teak grating for showering.

As the need for speed was paramount for the criminal runners to avoid capture, Marlow was thinking of speed when designing the Havana, but for “legal” reasons, like to get to the cruising destinations or fishing grounds. 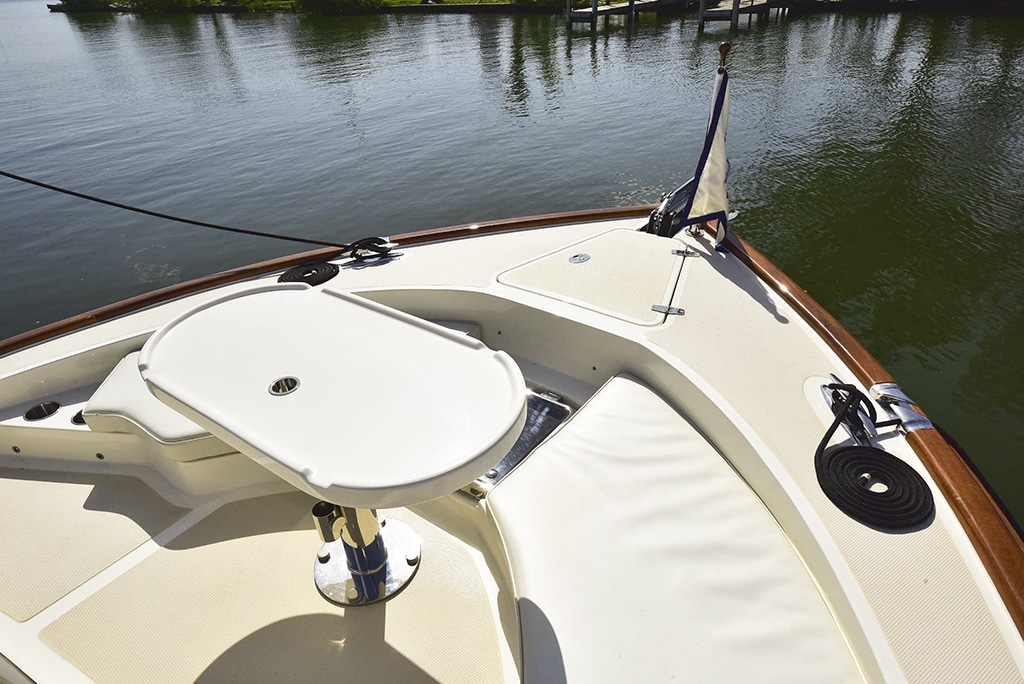 Speed it has. There are triple 300-hp Yamaha outboards bolted to the transom. Yup, that’s 900 horsepower, and it goes!

Performing our sea trial in the calm waters of the Manatee River near the Marlow Yachts facility in Palmetto, Florida, it’s easy to see that getting to the fish (or rum) fast and back to the dock can make all the difference. Cruising at 21.5 knots (3,500 rpm) yields a burn of 25 gph and a range of 255 nautical miles (25 percent fuel reserve). If on the chase or being chased, the 375 Havana opens up wide to 39.7 knots (6,100 rpm) for 153 nautical miles. Either way, a good cut of speed and range when necessary. 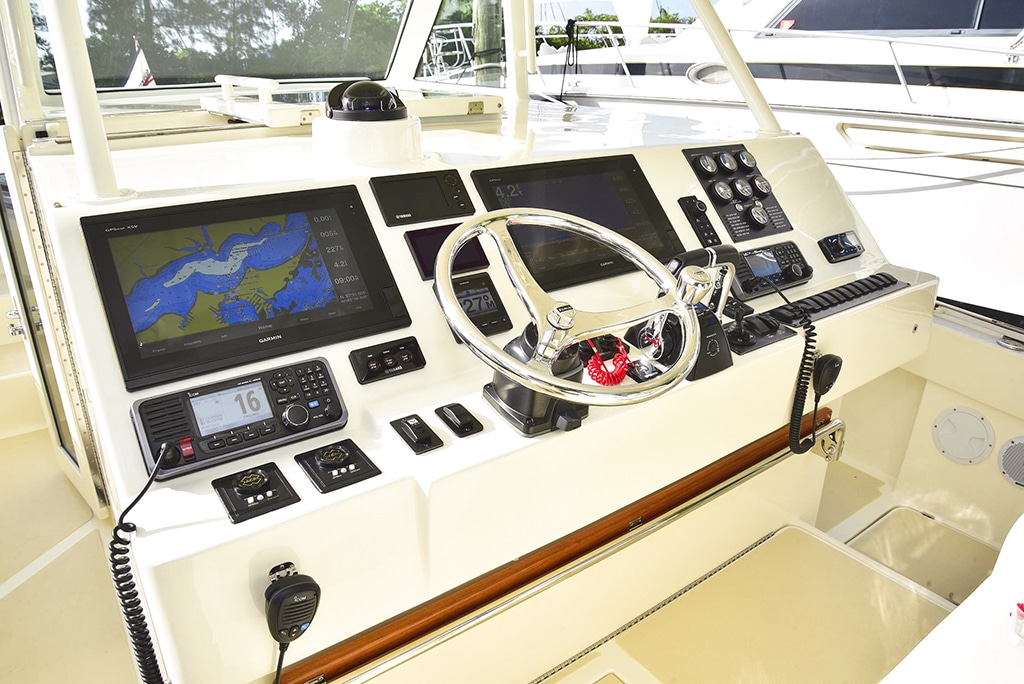 Complementing the console are twin pedestal-mounted Stidd helm seats and drop-down footrests. For improved forward visibility, a standing platform rises from the deck, kind of like having a built-in crate to stand on.

The hinged floor panel at the console reveals the Seakeeper SK3 stabilization gyro and 5kW Northern Lights diesel generator that also has a 40-gallon diesel tank. It’s not uncommon to find a diesel generator on a gas boat powered by outboards. It’s a safety thing.

All Hands on Deck

With a boat like the 375 Havana, the fun will be outdoors. Besides a nice cut of speed, there are several relaxing spots to lounge as well as the ability to utilize the Havana as a fishing platform.

Moving fore to aft is effortless as there’s full walkaround decking (with a few steps to the bow seating). A comfortable sunpad lounger with side grabrails is in front of the helm or sit forward on the bow pads that flank a hi-lo fiberglass table. Picture yourself relaxing at anchor, reading a good book while taking in the sun.

Back in the cockpit, behind the helm seats, is a fiberglass molded console that contains an enclosed sink and undercounter storage for fenders or lines. Tucked on either side are fold-down padded seats, perfect for the crew to watch the trolling lines. Under the seats are compartments for tackle drawers and gear, and there’s plenty of cockpit space to add in a few lounge chairs for cruising time.

To hide your rum or the catch of the day, there are two in-deck fishboxes with drains and handles so they can lift out easily. Rod holders and Rupp Top Gun outriggers trick out this machine.

A center hatch offers access to machinery space which includes a watermaker unit, pumps, piping, and more. A livewell in the transom can convert to a freezer for keeping food or bait chilled.

Doing double duty is the flush-mounted transom door that allows for easy boarding access from the dock, access to the water, and to land fish quickly.

On the starboard aft gunwale is an integrated fold-down boarding ladder. When deployed, swimmers can board from the built-in ladder and walk-through gunwale.

Generous combing rings the cockpit, and under-gunwale storage is available on the port side.

From the smart styling to the exceptional craftmanship to the attention to details, there is no mistaking the Prowler 375 Havana is all Marlow. Take her for a ride and become your own runner.