A proven design evolves with the Beneteau Swift Trawler 48.

Beneteau has built more than 1,300 Swift Trawlers, so it has the market dialed in. The builder knows that these fast trawlers appeal to both novice and salty cruisers, and it listens to owner and dealer feedback to make each successive design better and more user-friendly. That’s how the new Swift Trawler 48 was designed, with smart improvements and more upmarket features. We took Hull No. 2 out for a spin with Justin Joyner, Beneteau’s powerboat manager, to see how things have evolved. 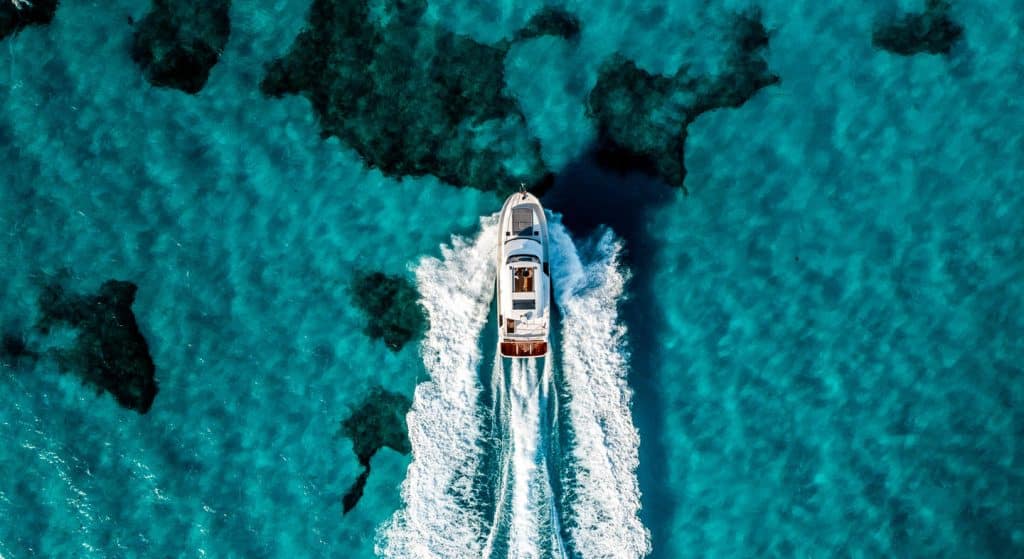 As I walked down the dock, I noticed one of the Swift 48’s new additions—a slatted fashion plate that was borrowed from the Grand Trawler 62. It’s not only a statement piece, but it also provides the anchoring structure for an acrylic door that blocks the breeze from pummeling anyone on the transom seat. The plate is only on starboard, which is the wider side deck because this model, like her predecessor, is still asymmetrical in layout with an offset cabinhouse. Also to starboard is a small hull gate that allows the driver to quickly hop onto the dock when tying up. Normal boarding is via the transom where there’s a double gate to port. These doors separate the cockpit from the swim platform. Our test boat featured the optional hydraulic version that can carry a 770-pound tender and be used as a teak beach. 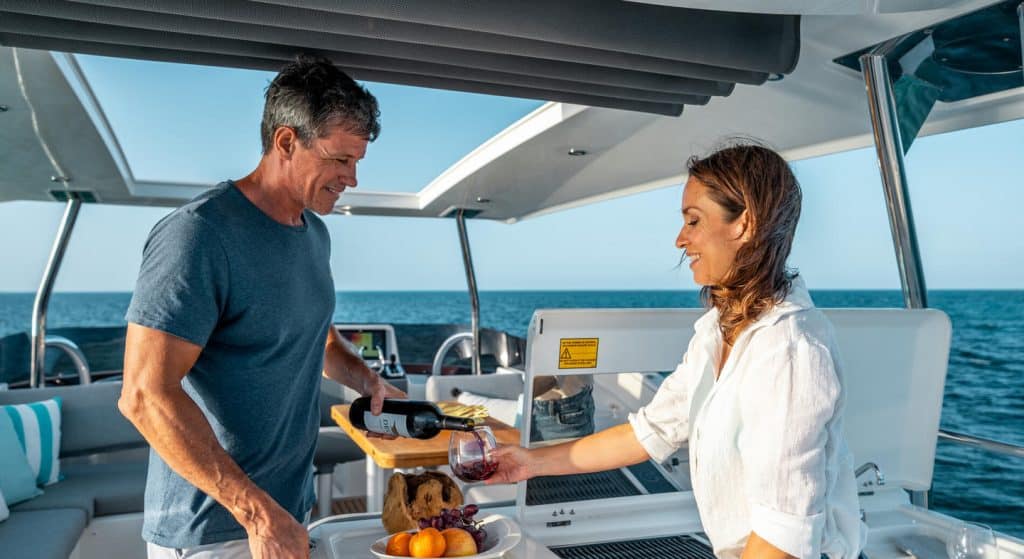 Steps to the flybridge are to port. With the help of a foot pedal, they slide forward and tuck up next to the glass entry door when not in use, thereby opening up the cockpit. When deployed, they’re more like a staircase than a ladder with good hand railings on both sides. On the flybridge, you’ll find facing L-shaped settees with a folding dining table in the middle. A wet bar module is aft, and the helm is on the centerline with a single bucket seat, twin MFDs, and a small steering wheel. The forward ends of the settees have hinging backrests to form companion seating on both sides of the driver.

Our test boat had the optional hardtop with an electrically actuated sunroof in the middle. Its design includes slender supports that make the structure appear to be floating—yet another feature that mirrors one on the Grande 62. It doesn’t matter if you choose the soft Bimini or the hardtop, the radar arch gives this boat a 19-foot air draft so be warned if you plan to cruise around low bridges. There’s no sedan version of the Swift Trawler 48, but it would be hard to give up this nice flybridge where everyone will want to enjoy happy hour sunsets and dinners under the stars. 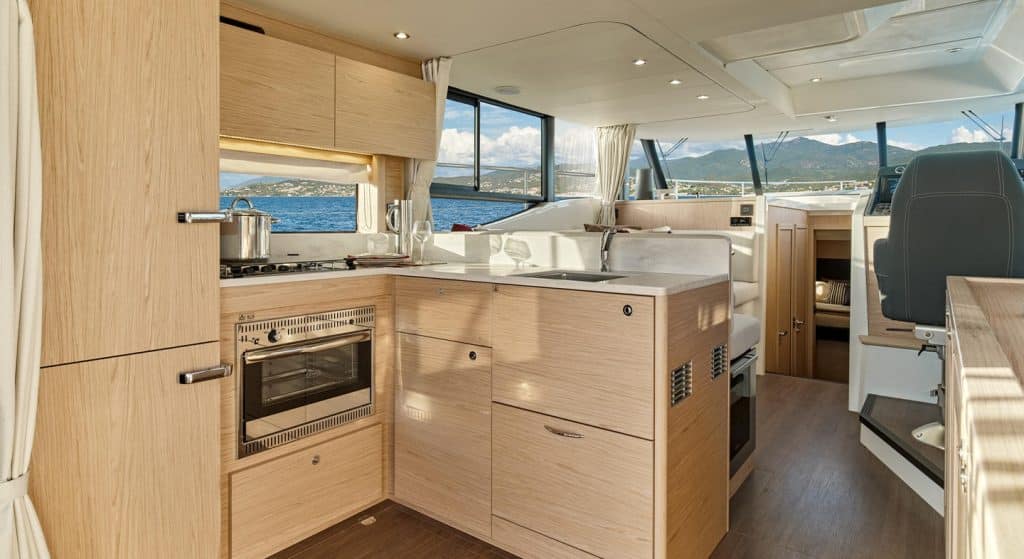 Inside is where the serious changes become obvious. The galley has moved aft and to port so it’s easier to serve anyone in the cockpit or on the flybridge. A Kenyon two-burner induction cooktop was spec’d on our boat but according to Joyner, about 40 percent of Swift buyers opt for propane so there’s no need to run the genset to make breakfast.

Refrigerated space has been enlarged to nine cubic feet in the full-height refrigerator and freezer, and the countertops are now Corian as they are on the Grand 62. There’s an option for a dishwasher, and the ample stowage space that runs along the starboard side makes sure the chef lacks for no tools. An icemaker is optional, and there’s room for a 23-bottle wine fridge because the Swift Trawler 48 is a French boat after all.

Forward is a U-shaped settee/dinette with an optional electric hi-lo table that converts into a berth. There’s no designated companion seat but since the dinette is elevated, several people can congregate here and keep the driver company. 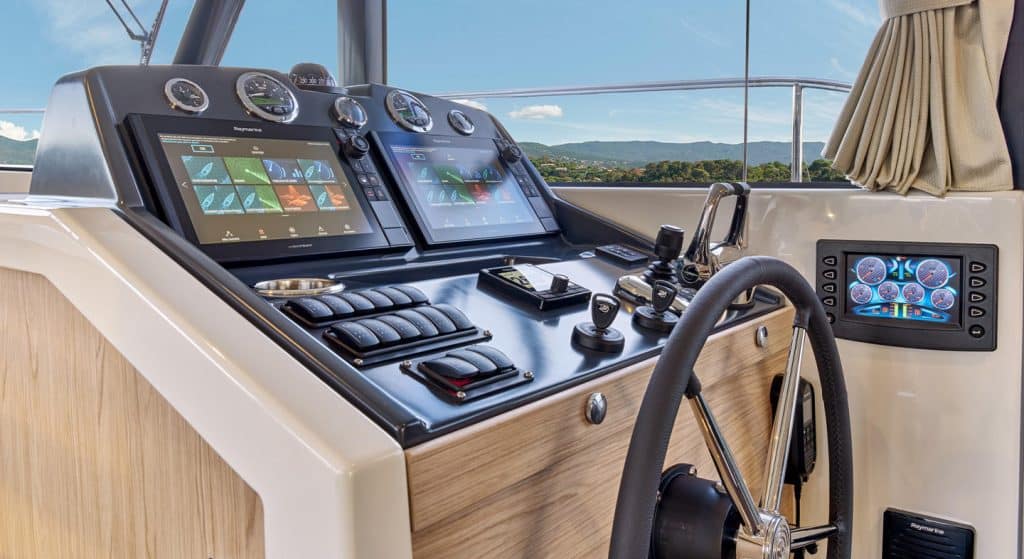 The lower helm moved from the centerline on the 47 to starboard on the 48, and it’s impressive. Twin 9-inch Raymarine MFDs are standard, but our boat had the upgraded 12-inch screens (the same as at the upper helm) with the engine information display on the outboard bulkhead. The throttles are on the dash to the right and the joystick is just inboard. A third station is available with joystick steering in the cockpit. It may be a worthwhile addition for docking in reverse since it’s not easy to see the platform from either the upper or lower helm. A backup camera is another solution.

Because the helm is offset, the driver can easily step out onto the wide side deck through the sliding door to help with lines, tie up with the midship cleat that’s at hand, sight along the entire starboard hull, or jump onto the dock through the hull gate mentioned before. The side door also has a full sliding screen so it’s a perfect way to welcome a breeze even in buggy cruising grounds. 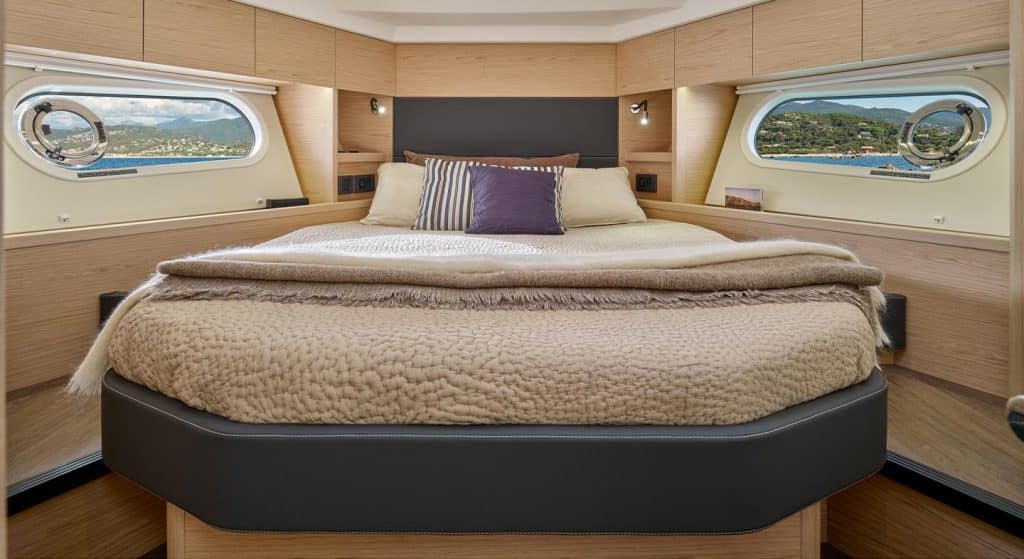 Below, the three-stateroom/two-head layout remains as it was on the Swift Trawler 47, but the storage space has been increased in both guest cabins, and the twin stateroom added a direct door to the second head making it an ensuite. The guest cabin with the double berth also has space for an optional washer/dryer. The standard finish is Alpi teak, but our boat had the optional oak that Joyner said is gaining in popularity.

Standard propulsion is provided by a pair of 350-hp Cummins QSB6.7 diesels, but our boat had the upgraded 425-hp motors. There were four people aboard, the fuel tank was nearly full, and the water tank was nearly empty. The hull is the same as on the 47 and because all Swift designs have a semi-displacement hull, they’re trawlers that will plane. We popped up at 16 knots and went all the way to wide-open throttle where we reached 25.8 knots at 3,100 rpm and burned 40 gph. A more fuel-efficient cruise can be found at 2,500 rpm and 18 knots where the consumption drops to a more manageable 24 gph. With 510 gallons of fuel, there’s an approximate 1,000-mile range at six knots.

We had feisty conditions with lumpy seas outside of Miami, but the Swift Trawler 48 wasn’t rattled. She sliced through the chop easily and turned sharply, ever responsive to the wheel. “This is a ‘go anywhere’ boat,” says Joyner. “It’s a long-range cruiser that can also pop up to twenty knots in twenty seconds.” 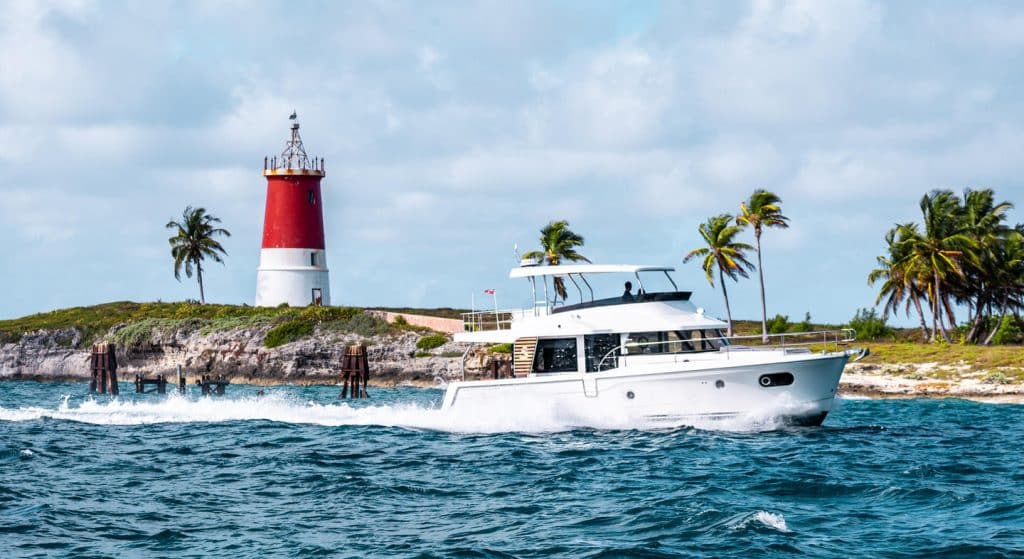 The Swift 48 replaces the 47, and she benefits from three things: a proven hull design identical to the 47, a refreshed interior that works better for today’s cruisers, and luxury features that have trickled down from the Grande Swift 62 which will likely proliferate throughout the entire line over time.

She’s all about going fast, both on the water and in terms of sales. With the changes, the new model has already caught the eye of many. Our test boat sold in one hour and four others were placed on order at the recent Miami boat show. If you’re thinking of distance cruising on a trawler with long legs and an impressive turn of speed, place your order quickly because this model, which took the best of what came before and then improved upon it, won’t just be sitting on the shelf.

Hope & Optimism in the stock market