Many of us ﬂock to the coasts during the summer to enjoy swimming, boating, ﬁshing, a break from the heat, and delicious seafood. In today’s globalized world, even those who live far from the coast have access to a plethora of seafood choices in our local restaurants and grocery stores. As you peruse your options, you may wonder which seafoods are best to eat, not just in terms of taste but also if they are sustainable.

But what does it really mean for seafood to be sustainable? By the simplest deﬁnition, a seafood product can be considered sustainable if it is captured in quantities small enough to prevent negative impacts to its population and is caught in a way that does not harm other species or marine habitats. Sustainability is all about the future productivity of marine ecosystems. But without a crystal ball, how can we know how the actions we take today will inﬂuence tomorrow’s ocean?

Since ﬁsheries scientists and managers are not fortune-tellers, they rely on several different metrics to determine if ﬁsh are harvested in a manner that promotes healthy marine ecosystems in the future. Our seafood choices consist of various species caught with many diverse methods from all corners of the globe, so there is no single metric that can be used to ﬁgure out if a given type of seafood is or is not sustainable. There are, however, a few key questions commonly asked to assess sustainability:

• What type of gear was used to catch this ﬁsh or shellﬁsh?
• How much bycatch does this gear usually cause?
• Does this gear type damage marine habitats?
• Where on the food chain does this species fall?
• Is it wild or farm-raised?

• Indiscriminate gear, such as purse seines, gill nets and trawls, usually results in more bycatch compared to selective gear, such as hooks, traps and harpoons. Yes, you can buy seafood caught by harpoon!
• Gear that touches the seaﬂoor (such as bottom trawls and dredges) is more likely to damage marine habitats than those that avoid it.
• Ask your seafood dealer how and where the ﬁ sh was caught. (You may also be able to verify this by doing some Internet research.)

Discarded ﬁsh
“Bycatch” refers to ﬁsh that are caught incidentally by ﬁshermen who are usually targeting one or two species. In the U.S., ﬁshermen are permitted to ﬁ sh on a species-by-species basis and are subject to regulations on when and where they can cast a line and on the size and number of the ﬁ sh they are allowed to keep. Bycatch can include a species that a ﬁsherman is not permitted to harvest, such as one caught out of season or that is smaller or larger than the legal size. Sometimes ﬁshermen accidentally catch too many ﬁsh of a particular species, and they have to throw some back. This is also considered bycatch. Fishery regulations in the U.S. require that most bycatch be discarded at sea. Because it is usually dead, bycatch can have a major negative impact on marine ecosystems.

If ﬁshing gear touches the seaﬂoor, it can damage marine habitats. This causes major impacts on other species and on the overall health of marine ecosystems. Bottom trawls are the most notorious example of ﬁshing-induced habitat destruction. They catch ﬁsh by dragging heavy gear along the bottom and are particularly harmful to rocky habitats, sponges and corals. Pole-caught, handline, troll, or trap-caught seafoods are better options because they cause very little habitat destruction.

Food Chain
Fish that are low on the food chain are generally sustainable options because they are, for the most part, more abundant than ﬁsh that are higher on the food chain. They also reproduce at a younger age, which helps them recover relatively quickly from low to moderate levels of overﬁshing. In the U.S., we tend to prefer long-lived, predatory ﬁsh, such as cod, tuna, swordﬁsh, salmon, and halibut. By expanding your tastes to include species lower on the food chain, you can support healthy marine ecosystems by reducing pressure on the larger groups, several of which are overﬁshed.

Some tasty options that are low on the food chain include mackerel, tilapia, catﬁ sh, mussels, clams, and oysters. There are some exceptions to this rule, which is why it is important to do a bit of research when considering seafood options. For example, shrimp are low on the food chain, but most that are available in the U.S. were farm-raised in ways that cause signiﬁcant habitat damage. Americans consume more than one billion pounds of shrimp every year, and 90 percent of that is imported from overseas aquaculture facilities. Shrimp aquaculture operations in some developing countries have a particularly bad track record for habitat destruction and human rights violations. 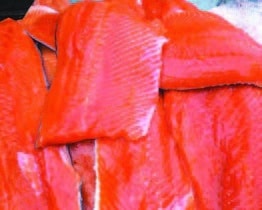 Wild vs. farm-raised
Most of the seafood consumed in the U.S. is harvested from wild populations. However, the amount of farm-raised ﬁsh and shellﬁsh in American seafood markets is rapidly expanding. There are several beneﬁ ts associated with aquaculture, but also many environmental costs. Aquaculture tends to generate strong opinions, and some argue that it is necessary to feed a growing human population while also supporting the health of marine ecosystems by taking pressure off wild stocks. Others argue that aquaculture relies too heavily on wild-caught ﬁsh to create feed for farm-raised ﬁsh, that it pollutes the environment with ﬁsh waste and antibiotics, and that escapees can harm wild populations by introducing diseases or altering the wild gene pool.

Farm-raised mussels, clams and oysters are generally beneﬁcial to marine ecosystems because they feed by ﬁltering seawater and do not require artiﬁcial feeds. They also improve water quality in the surrounding region. By purchasing these farm-raised species, you can assure that you are supporting healthy marine ecosystems. For others, speak with your seafood dealer and decide if they are sustainable options or not. In general, it is best to avoid seafood from aquaculture operations in developing countries because they tend to have fewer regulations compared to the U.S.

Take action
First, to see which types of seafood are sustainable, go to seafoodwatch.org or ﬁshwatch.gov. Another great way to learn more about seafood sustainability is to buy it locally and talk with ﬁshermen and dealers specializing in seafood.

You may be able to ﬁnd it at your local farmers’ market or join a Community Supported Fishery (CSF), where you can feel conﬁdent that it is sustainable (communityﬁsheriesnetwork.org, localcatch.org). CSFs follow the model of Community Supported Agriculture in that they bring fresh, seasonally available, locally caught seafood directly to consumers. They also offer a great way to support both healthy marine ecosystems and coastal economies.

By Julia Beaty, ﬁsheries social scientist
Courtesy of Sailors for the Sea

Go with the Flow Cruising the Louisiana and Mississippi Gulf…