Since early fall 2021, MarketGauge has been urging you to focus on the fact that many of the economic and market indicators we evaluate were just not adding up.

As a subscriber, you may recall the numerous weekly Market Outlook issues that conveyed a puzzling sentiment that contrasted the fact that the market was going up while several concerning underlying technical conditions were questionable (at best) and more likely bearish (at face value).

At the same time, our own Mish was repeatedly writing and speaking publicly about how to adjust your investment position to prepare for what was coming.

Her message was simple.  Inflation would soon exceed expectations (which veteran investors know is not good for growth equity valuations), and to make matters worse…

Higher than expected inflation would lead to “stagflation” (it’s a 70’s thing) which would be the “surprise” problem that would finally weigh on the bull market in a way that could not be denied.

She was early, but not wrong.

And if you had been following her model portfolio throughout this period, you’d probably be saying that it was hard to deviate from what the consensus thinking was, but it was easy to see her trades were working.

Mish’s trades (which proved to be a solution) were focused on commodity related trends: energy, agricultural and precious metals.

That was the right call, and that’s why her model portfolio has been up every year despite the fundamental side of the market is still bearish.

Some of Wall Street’s best and brightest began ratcheting down their US GDP projections and company earnings forecasts.

Two of the best, Mike Wilson, Chairman, Global Investment Committee of Morgan Stanley and Mike Hartnett, Bank of America’s Chief Investment Strategist, have been warning of “inflation shock” and tough times ahead. They both came out Friday morning (June 3) and warned investors NOT to chase the market. In their words, this was nothing more than a “bear market bounce.” The S&P 500 proceeded to drop over 1.5%, and the Nasdaq tech-heavy index fell by 2.5%.

But it was the deeply troubling rhetoric of Elon Musk, founder and CEO of Tesla, and Jamie Dimon, Chairman of JP Morgan, that echoed the negative sentiment from all types of business owners and economists this past week. Even the Treasury Secretary, Janet Yellen, came out to admit that she got the Inflation scenario wrong. 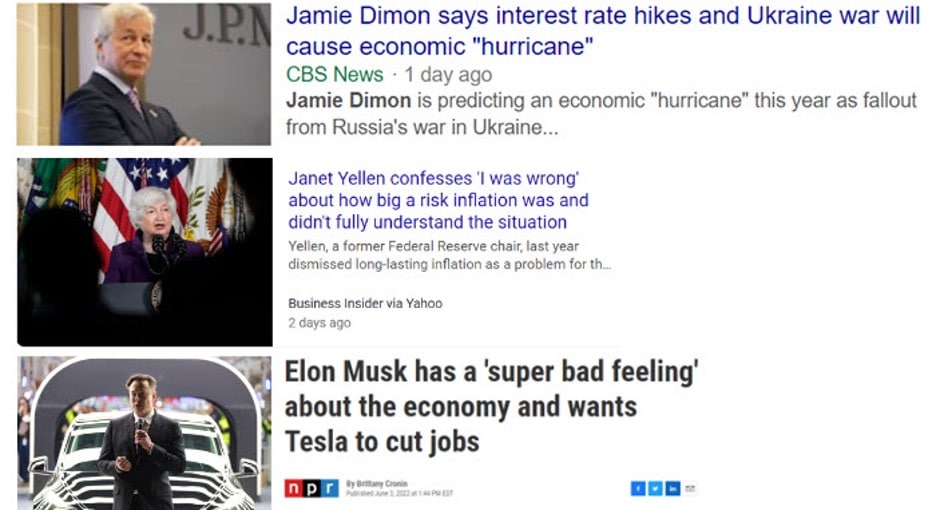 90% of Americans have an even bigger concern.

In recent polls, 90%+ of Americans said their biggest concern for the near future was the price of goods and energy. One of the most prevalent subjects covered by TV newscasters is the price increases of EVERYTHING. Sad stories about people having to decide on whether to fill up their cars (to get them to work), or be able to buy food to eat are multiplying.

Get it all here