Where Are We Going?

A Few Positive Ways To Deal With Your Investments

When I was young, my father and Mother (she is still alive), used to take my brother and I on surprise trips.  They would load us up in the car and we would say “where are we going?”

The answer was always “It’s a surprise” or “You will soon find out.”  It was fun, adventurous and, as a young kid, exciting.

Sometimes we would go to get ice cream, sometimes to Cedar Point (the largest amusement park in the US today and even back then it was incredible) or just to visit my relatives in Cleveland, about an hour away.

The idea of not knowing where we were going was really cool back then.

The Markets and The Economy are having Emotional Issues

This past week almost every economist, talking head and journalist was asking “Where are we going?”

The unknown about where we are going in the economy and the bond and stock markets is creating anxiety, trepidation, uncertainty, and extreme volatility.

Let’s look at this past week.  Monday-Wednesday, we were down about 2.5%, then the hotter than expected news about CPI was released on Thursday morning.

Inflation for September came in more elevated and hotter than expected and the markets dropped by 2% from the opening bell.

But by the end of the day, the stock market did one gigantic reversal and we ended up almost 3% in most of the indices.  It was one of the largest intraday reversals.

Thursday’s huge rally was followed by an equal (and opposite) reaction to the downside on Friday.  It provided more emotional turmoil to a market that many had hoped would see positive follow thru. Clearly, there was none. 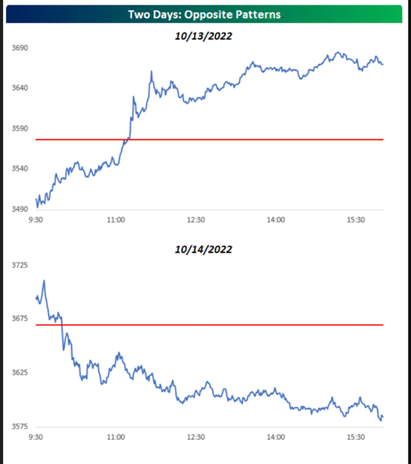 After rising almost 3% on Thursday, the S&P 500 declined by 2.4% on Friday.  That marked the 53rd decline of 1% or more this year.  That’s already the most volatility we have seen since 2009 and there are more than two months of this year remaining.

So, where exactly are we headed next?

The simple answer is we have no idea.  Everyone has an opinion and at least half differ from the others, especially on where the market is headed next.

We can assure you that we are in for a much more volatile ride.  Why?

Click here to read additional reasons we are likely in for a continued volatile ride, and…